Hooksett is a town in Merrimack County, New Hampshire, United States. The population was 13,451 at the 2010 census and an estimated 14,428 in 2018. The town is located between Manchester, the state's largest city, and Concord, the state capital. A prominent landmark is Robie's Country Store, a National Historic Landmark and a frequent stop for presidential candidates during the New Hampshire primary.

Hooksett was incorporated in 1822. First known as Chester Woods and Rowe's Corner, this town was called Hooksett for nearly fifty years before being incorporated. The name may have come from a hook-shaped island in the Merrimack or from early fishermen, who called the area Hookline Falls. Rocky ledges flank the Merrimack River, and there were several cross-river ferries located here, as well as lumber mills and a brick-making establishment powered by the falls. In 1794, the lottery-funded Hooksett Canal became part of the transportation facilities of the Amoskeag cotton mills in Manchester. The first census, taken in 1830, reported 880 residents. 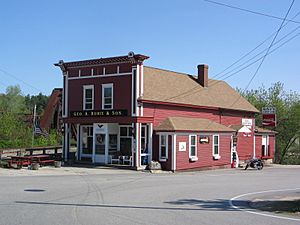 There were 4,926 households, out of which 34.2% had children under the age of 18 living with them, 59.0% were headed by married couples living together, 8.8% had a female householder with no husband present, and 28.3% were non-families. 20.4% of all households were made up of individuals, and 7.6% were someone living alone who was 65 years of age or older. The average household size was 2.59, and the average family size was 3.01.

Hooksett is part of School Administrative Unit 15, along with the neighboring towns of Auburn and Candia. SAU-15 administers five schools, three within Hooksett:

All content from Kiddle encyclopedia articles (including the article images and facts) can be freely used under Attribution-ShareAlike license, unless stated otherwise. Cite this article:
Hooksett, New Hampshire Facts for Kids. Kiddle Encyclopedia.