Candia is a town in Rockingham County, New Hampshire, United States. The population was 3,909 at the 2010 census. The town includes the villages of Candia, Candia Four Corners and East Candia.

Settled in 1743, Candia was once part of Chester and known as "Charmingfare", probably because of the many bridle paths or "parades" through the pleasant scenery. Charmingfare was incorporated in 1763 and named "Candia" by Colonial Governor Benning Wentworth, possibly after the old name under Venetian domination of the principal city of Crete, which he had visited after graduation from Harvard. Another account holds, "The town received its present name in compliment to Governor Benning Wentworth, who was once a prisoner on the island of Candia, in the Mediterranean Sea."

Candia was served by the Portsmouth & Concord Railroad, which stretched between its namesake cities. In 1862 the segment between Candia and Suncook was abandoned, coinciding with the opening of a new segment between Manchester and Candia. Therefore, the new line ran from Manchester to Portsmouth via Candia. In 1895 ownership of the line passed to the Boston & Maine Railroad who made it their Portsmouth Branch. Passenger service ended in 1954. The last trains passed through Candia in the early 1980s. The track was abandoned in 1982 and removed between 1983 and 1985. Today the railbed is part of the Rockingham Recreational Trail.

According to the United States Census Bureau, the town has a total area of 30.6 square miles (79 km2). 30.3 square miles (78 km2) of it is land and 0.2 square miles (0.52 km2) of it is water, comprising 0.79% of the town. The town is bordered by Deerfield to the north, Hooksett (in Merrimack County) to the west, Auburn and Chester to the south, and Raymond to the east. Notable villages in the town include Candia proper, near the town's northern border; Candia Four Corners, closer to the geographic center of the town; and East Candia, near the town's eastern border.

Candia is drained by the North Branch River, a tributary of the Lamprey River. The town lies almost fully within the Piscataqua River watershed except for the western and southern edges, which are in the Merrimack River watershed. The highest point in town is Hall Mountain, at 941 feet (287 m) above sea level, located in Bear Brook State Park in the northwestern part of the town. (The main entrance to the state park and most of its facilities are in neighboring Allenstown.) 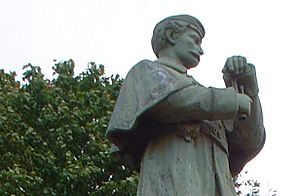 There were 1,359 households out of which 40.0% had children under the age of 18 living with them, 72.0% were married couples living together, 5.2% had a female householder with no husband present, and 18.4% were non-families. 12.7% of all households were made up of individuals and 3.2% had someone living alone who was 65 years of age or older. The average household size was 2.88 and the average family size was 3.14. 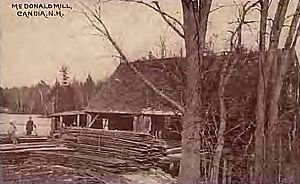 All content from Kiddle encyclopedia articles (including the article images and facts) can be freely used under Attribution-ShareAlike license, unless stated otherwise. Cite this article:
Candia, New Hampshire Facts for Kids. Kiddle Encyclopedia.