Bear Brook State Park is a 10,000-acre (4,000 ha) preserve in Allenstown, New Hampshire, and neighboring towns. It is one of New Hampshire's largest state parks.

The park takes its name from Bear Brook, a stream which runs through the park. Its environment is that of the Northeastern coastal forests ecoregion. 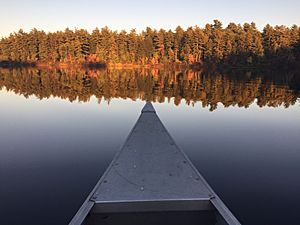 In 1985 and 2000, the remains of four females were found in the park. In January 2017, a suspect in the case was identified as Terry Peder Rasmussen (also known by several aliases) who had died in prison in 2010. In June 2019, three of the females were identified.

All content from Kiddle encyclopedia articles (including the article images and facts) can be freely used under Attribution-ShareAlike license, unless stated otherwise. Cite this article:
Bear Brook State Park Facts for Kids. Kiddle Encyclopedia.