Deerfield is a town in Rockingham County, New Hampshire, United States. The population was 4,280 at the 2010 census. Deerfield is home to the annual Deerfield Fair.

Deerfield was originally part of Nottingham. In 1756, residents petitioned for organization of a separate parish, but were denied. In 1765, while a second petition was pending, two local hunters presented Colonial Governor Benning Wentworth with a deer. Permission was granted, and "Deerfield" was incorporated in 1766. The incorporation act for Deerfield was signed by three members of the Leavitt family, including Capt. Samuel who later served as one of the town's first selectmen. Leavitts Hill in Deerfield was named for the family, who first settled in nearby Exeter.

"Deerfield Parade", a hilltop district first settled about 1740, was located on the early postal route between Concord and Portsmouth. Here, the militia of the Revolutionary and Civil wars trained and "paraded" on the village common. The "Parade" was then a professional, cultural and trade center. About 1798, citizens founded Deerfield Academy, a high school. Unfortunately, it burned in 1842.

Once a thriving farm community which was disappointed when bypassed by railroads, the town in 1876 established the Deerfield Fair. Now billed as "New England's Oldest Family Fair", the four-day event draws huge crowds each autumn to admire animals, produce and crafts, or enjoy amusement park rides.

According to the United States Census Bureau, the town has a total area of 52.3 square miles (135 km2), of which 50.9 sq mi (132 km2) is land and 1.4 sq mi (3.6 km2) is water, comprising 2.58% of the town. The highest point is the summit of Nottingham Mountain, at 1,345 feet (410 m) above sea level, near the town's western border. Portions of the Pawtuckaway Mountains occupy the eastern border of the town. Deerfield is primarily drained by the Lamprey and North Branch rivers, within the Piscataqua River (Coastal) watershed, while the western edge and northernmost section of town is in the Merrimack River watershed. 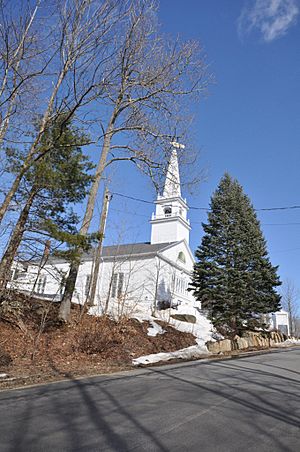 Church in the town center

There were 1,225 households of which 43.3% had children under the age of 18 living with them, 71.0% were married couples living together, 5.3% had a female householder with no husband present, and 19.5% were non-families. 12.9% of all households were made up of individuals and 3.8% had someone living alone who was 65 years of age or older. The average household size was 2.98 and the average family size was 3.27.

All content from Kiddle encyclopedia articles (including the article images and facts) can be freely used under Attribution-ShareAlike license, unless stated otherwise. Cite this article:
Deerfield, New Hampshire Facts for Kids. Kiddle Encyclopedia.