Northwood is a town in Rockingham County, New Hampshire, United States. The population was 4,241 at the 2010 census. 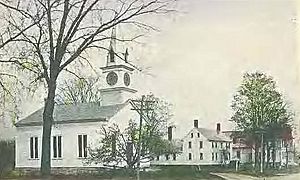 First settled in 1763, Northwood was incorporated on February 6, 1773 by Colonial Governor John Wentworth, when a large tract of land called "North Woods" was separated from Nottingham. Around 1800, the Portsmouth to Concord Turnpike was built, and the town began to prosper. Numerous taverns accommodated sledge and stage passengers. At one time, there were some twelve sawmills in the town, five of which were replaced by shoe factories during the latter half of the 19th century.

Four Northwood districts along Route 4 are considered historic sections of town. They are, from east to west, East Northwood, Northwood Ridge, Northwood Center and Northwood Narrows. The town is home to Coe-Brown Northwood Academy, founded in 1867.

According to the United States Census Bureau, the town has a total area of 30.0 square miles (78 km2), of which 28.0 sq mi (73 km2) is land and 2.1 sq mi (5.4 km2) is water, comprising 6.89% of the town. Northwood is well known for its lakes, with both seasonal and year-round residences. The larger lakes and ponds include Bow Lake, which is part of the Piscataqua River drainage basin, and Northwood Lake, Pleasant Lake, Jenness Pond, Harvey Lake, and Long Pond, all of which drain to the Suncook River, a tributary of the Merrimack River. The highest point in Northwood is Saddleback Mountain, at 1,150 feet (350 m) above sea level.

Northwood has a diverse ecosystem with many various flora and fauna. The climate of Northwood is a temperate, humid continental climate, with warm summers and cold, snowy winters. Some of the flora and fauna that can be seen in Northwood are as follows. 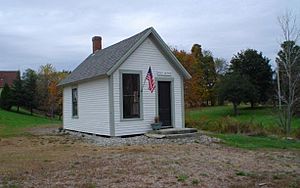 There were 1,347 households, out of which 36.7% had children under the age of 18 living with them, 62.0% were married couples living together, 7.7% had a female householder with no husband present, and 25.7% were non-families. 18.0% of all households were made up of individuals, and 5.1% had someone living alone who was 65 years of age or older. The average household size was 2.70 and the average family size was 3.07. 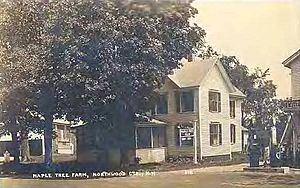 Northwood is home to Camp Yavneh, a Jewish summer camp founded in 1944 on Lucas Pond, and Wah-Tut-Ca Scout Reservation, a Boy Scout Camp run by the Spirit of Adventure Council.

All content from Kiddle encyclopedia articles (including the article images and facts) can be freely used under Attribution-ShareAlike license, unless stated otherwise. Cite this article:
Northwood, New Hampshire Facts for Kids. Kiddle Encyclopedia.