Strafford is a town in Strafford County, New Hampshire, United States. The population was 4,230 at the 2020 census. The two main settlements in town are Center Strafford and Bow Lake Village. 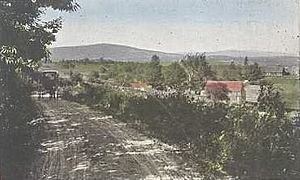 The Blue Hills and the Job Hills from Northwood Road c. 1910

Once part of Barrington, Strafford was set off due to the lengthy travel required to attend town meetings. Settled prior to the Revolution, the town incorporated in 1820, taking its name from the county in which it is located. Strafford County had been organized in 1773 during the administration of Colonial Governor John Wentworth, and named in honor of Thomas Wentworth, Earl of Strafford. 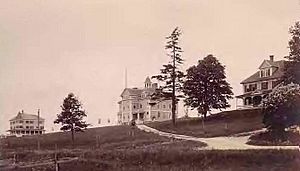 The Austin Academy once stood in the center of Strafford village. George Cate, a wealthy shoe manufacturer, visited the school at the request of its principal Alvin E. Thomas and was so impressed with the school that he left at his death $200,000 on the condition that his name be added to that of Mr. Austin. After his death, the hundred-acre farm of George Washington Foss was purchased and soon a beautiful new building, designed by well-known Boston architect, Richardson, sat on the hill with the name on its facade, "Austin-Cate Academy - 1903". After the property was purchased by the state for a National Guard training center, all of the original wooden buildings were torn down and replaced by new brick buildings.

The Blue Hills Range divides the town in half, running southwest to northeast. Parker Mountain, the highest point in the range and in Strafford, rises to 1,420 feet (430 m) above sea level. 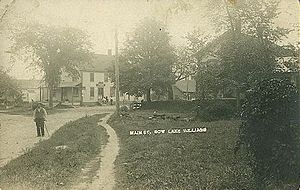 There were 1,281 households, out of which 43.2% had children under the age of 18 living with them, 68.5% were married couples living together, 8.2% had a female householder with no husband present, and 20.2% were non-families. 15.1% of all households were made up of individuals, and 4.4% had someone living alone who was 65 years of age or older. The average household size was 2.82 and the average family size was 3.14.

All content from Kiddle encyclopedia articles (including the article images and facts) can be freely used under Attribution-ShareAlike license, unless stated otherwise. Cite this article:
Strafford, New Hampshire Facts for Kids. Kiddle Encyclopedia.