Pittsfield is a town in Merrimack County, New Hampshire, United States. The population was 4,106 at the 2010 census.

The central village in town, where 1,576 people resided at the 2010 census, is defined as the Pittsfield census-designated place (CDP), and is located on the Suncook River in the west-central portion of town, and consists of the built-up village centered on the intersections of Barnstead Road, Catamount Road, Carroll Street, and Depot Street. 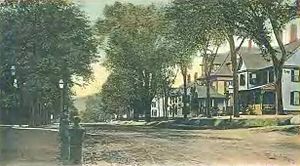 For many years prior to its 1782 incorporation, this town was an unnamed parish of Chichester. Like Pittsburg in the north, Pittsfield was named for William Pitt, Prime Minister of the United Kingdom, and a great friend of the Colonies prior to the American Revolution. The town was settled in 1768 by several families originally from Hampton. Founder John Cram built grist and sawmills here in the late 18th century. Since 1901, Globe Manufacturing has made protective clothing for firefighters here.

The town claimed the Guinness World Record in July, 2001, as the place where the most number of people wore Groucho Marx glasses at the same time (522). Before Pittsfield's attempt, no other town had tried to set the record. 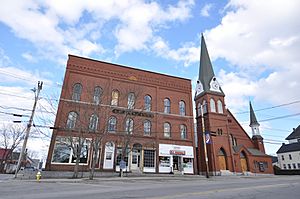 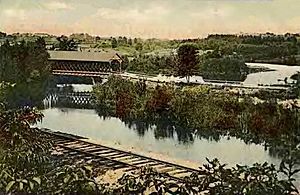 In 1934, the American composer Alan Hovhaness (1911–2000), who spent time with his maternal family members (specifically the family of the Reverend Walter Scott, his grandfather) in Pittsfield during his youth, wrote a fantasy for cello and piano entitled Legend of the Sunkook [sic] Valley (Op. 1, no. 4).

All content from Kiddle encyclopedia articles (including the article images and facts) can be freely used under Attribution-ShareAlike license, unless stated otherwise. Cite this article:
Pittsfield, New Hampshire Facts for Kids. Kiddle Encyclopedia.