Raymond is a town in Rockingham County, New Hampshire, United States. The population was 10,138 at the 2010 census. Part of Pawtuckaway State Park is in the north.

The central village in town, where 2,855 people resided at the 2010 census, is defined as the Raymond census-designated place (CDP), and is located along the Lamprey River near New Hampshire Route 27.

This town was first settled by families from Exeter as a parish of Chester, and known as Freetown because it was exempt from the usual obligation of reserving its tall pine trees for masts in the Royal English Navy. The town was incorporated in 1764 by Colonial Governor Benning Wentworth.

There are at least two theories regarding the source of the town's name. The earlier theory, stated by Joseph Fullonton in his "History of Raymond," published 1875, is that the name was chosen as "a new and classical one." Fullonton relates that the original name of "Freetown" “arose from the ship timber business” where the king claimed the best trees. The locals had other ideas and took the trees and “being successful here, none molesting, they called it Freetown.” Fullonton states that at incorporation in 1764, changing the name from “Freetown” to “Raymond” was “taking a new and classical one, shows that there are minds not disposed to tread all the time in one path, but capable of thinking and advancing,” and that the word "Raymond" means “the lustrous, luminous or shining world.”

In a second theory, the town was named for Captain William Rayment, or Raymond, of Beverly, Massachusetts, who had raised a company of soldiers to fight in the war against Canada in 1690. The Massachusetts General Court in 1735 granted Captain Raymond and his company a township called Beverly-Canada (now Weare) as payment for their services, but that claim was ruled invalid after New Hampshire separated from Massachusetts in 1741. So in 1767, heirs of the veterans were instead awarded land in Maine. Originally called Raymondtown Plantation, it today composes the towns of Raymond, Casco and part of Naples.

In 1906, Andrew Carnegie awarded a grant of $2000 toward the construction of a Carnegie library in Raymond, and in 1908 the Dudley-Tucker Library opened overlooking the Common.

The Concord and Portsmouth Railroad line from Manchester to Portsmouth reached Raymond in 1861. The line later became the Portsmouth Branch of the Boston and Maine Railroad. Railroad service was abandoned in 1982 and the line is now a rail trail. The restored depot survives today as home to the Raymond Historical Society.

The town is crossed by state routes 27, 101, 102 and 107. It borders the towns of Deerfield and Nottingham to the north, Epping and Fremont to the east, Chester to the south and Candia to the west. 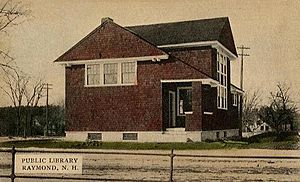 Dudley-Tucker Library in 1908, the year it opened

There were 3,493 households out of which 39.6% had children under the age of 18 living with them, 59.1% were married couples living together, 9.5% had a female householder with no husband present, and 26.5% were non-families. Nineteen percent of all households were made up of individuals and 5.9% had someone living alone who was 65 years of age or older. The average household size was 2.77 and the average family size was 3.18. 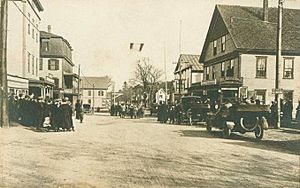 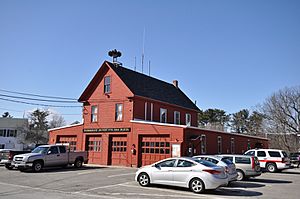 The Torrent Hose Company (fire station) in the town center

There were 1,116 households out of which 34.9% had children under the age of 18 living with them, 50.8% were married couples living together, 9.9% had a female householder with no husband present, and 33.8% were non-families. 24.6% of all households were made up of individuals and 8.9% had someone living alone who was 65 years of age or older. The average household size was 2.54 and the average family size was 3.06.

All content from Kiddle encyclopedia articles (including the article images and facts) can be freely used under Attribution-ShareAlike license, unless stated otherwise. Cite this article:
Raymond, New Hampshire Facts for Kids. Kiddle Encyclopedia.