Weare is a town in Hillsborough County, New Hampshire, United States. The population was 8,785 at the 2010 census. It is close to two important New Hampshire cities, Manchester and Concord. 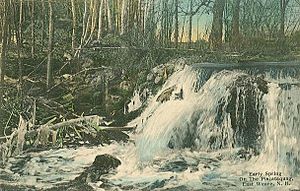 It was granted to veterans of the Canadian wars in 1735 by Governor Jonathan Belcher, who named it Beverly-Canada after their hometown, Beverly, Massachusetts. But the charter was ruled invalid because of a prior claim by the Masonian proprietors, who granted six square miles as Hale's Town to Ichabod Robie in 1749. It was also known as Robie's Town or Weare's Town before being incorporated by Governor Benning Wentworth in 1764 as Weare, after Meshech Weare, who served as the town's first clerk and later went on to become New Hampshire's first governor.

In 1834, Moses Cartland founded Clinton Grove Academy, the first Quaker seminary in the state. A cousin of John Greenleaf Whittier, Cartland named the village where the school was located Clinton Grove, in honor of Dewitt Clinton, chief sponsor of the Erie Canal. The original academy served as a private high school. The complex, which included a classroom building, boarding house, barn and sheds, burned in 1872. Classes were then held in the Quaker meetinghouse across the common until 1874, when a new building was completed. It would serve as the Weare school district from 1877 to 1938.

On September 21, 1938, following several days of heavy rain, the New England Hurricane of 1938 passed through the center of New England. The additional rains from the storm caused the Deering Reservoir dam to breach, releasing a wall of water that rushed down to the Weare Reservoir dam. Although the dam held, the flash flood broke through the land at the side of the dam, releasing millions of gallons of reservoir water. The raging river, completely out of control, washed away everything in its path, leaving parts of Weare devastated. Many active mills were destroyed in the disaster.

In response to the disaster and seasonal flooding, the U.S. Army Corps of Engineers built the 2,000-foot (610 m) long Everett Dam, as part of the Hopkinton-Everett Flood Control Project, which had been authorized by Congress to prevent a recurrence of the devastating floods. The overall project was completed in 1963 at a total cost of $21,400,000. The dam required the village of East Weare to be permanently abandoned, and formed Everett Lake.

In 2005, the town was proposed as the site of the Lost Liberty Hotel, a farmhouse owned at the time by U.S. Supreme Court Associate Justice David Souter. The effort to seize Souter's property for the project, in retaliation for a June 2005 court ruling he supported concerning eminent domain, received international media coverage. However, at the February 4, 2006, deliberative session of the town meeting, a warrant article that would have empowered town officials to take the property was amended by residents in a way that made the March 14, 2006, ballot measure moot.

There were 2,618 households, out of which 48.2% had children under the age of 18 living with them, 71.0% were married couples living together, 5.6% had a female householder with no husband present, and 19.1% were non-families. 13.4% of all households were made up of individuals, and 2.6% had someone living alone who was 65 years of age or older. The average household size was 2.97 and the average family size was 3.28.

Weare Middle School and Center Woods Upper Elementary School are located together in one campus in Weare center and serve children from fourth grade through eighth grade.

All content from Kiddle encyclopedia articles (including the article images and facts) can be freely used under Attribution-ShareAlike license, unless stated otherwise. Cite this article:
Weare, New Hampshire Facts for Kids. Kiddle Encyclopedia.