Deering is a town in Hillsborough County, New Hampshire, United States. The population was 1,912 at the 2010 census.

First settled about 1765, the town was incorporated on January 17, 1774 by John Wentworth, governor of the province of New Hampshire. He named it Deering after the maiden name of his wife, Frances Deering Wentworth, just as two years earlier he bestowed Francestown with her first name. Deering had 928 residents when the first census was taken in 1790. By 1859, the population was 890. Its hills and valleys were well suited for agriculture. Industries included two sawmills, one gristmill, and one clothing factory.

Deering is in northwestern Hillsborough County, bordered by Hillsborough and Henniker to the north, Weare to the east, Francestown to the south, Bennington to the southwest, and Antrim to the west. According to the United States Census Bureau, the town has a total area of 31.4 square miles (81.4 km2), of which 30.8 square miles (79.8 km2) is land and 0.66 square miles (1.7 km2) is water, comprising 2.04% of the town. The highest point in Deering is Clark Summit, at 1,570 feet (480 m) above sea level. Deering lies fully within the Merrimack River watershed. The eastern two-thirds of the town are drained by tributaries of the Piscataquog River, which flows east to join the Merrimack in Manchester, while the western third of the town drains to the Contoocook River, which forms the western boundary of the town and flows north to the Merrimack in Penacook.

The town is crossed by State Route 149, connecting Hillsborough to the north with Weare to the east. 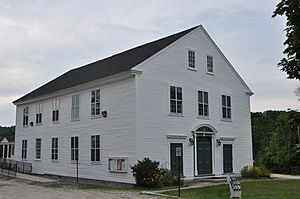 There were 740 households, out of which 28.4% had children under the age of 18 living with them, 58.9% were headed by married couples living together, 7.3% had a female householder with no husband present, and 27.8% were non-families. 20.1% of all households were made up of individuals, and 6.2% were someone living alone who was 65 years of age or older. The average household size was 2.49, and the average family size was 2.85.

All content from Kiddle encyclopedia articles (including the article images and facts) can be freely used under Attribution-ShareAlike license, unless stated otherwise. Cite this article:
Deering, New Hampshire Facts for Kids. Kiddle Encyclopedia.