Henniker is a town in Merrimack County, New Hampshire, United States. As of the 2010 census, the town had a total population of 4,836. Henniker is home to New England College and Pats Peak Ski Area. Henniker is a college town and resort area, featuring both skiing and white-water kayaking.

The main village of the town, where 1,747 people resided at the 2010 census, is defined as the Henniker census-designated place (CDP), and is located along the Contoocook River at the junction of New Hampshire Route 114 with Old Concord Road. The town also includes the village of West Henniker. 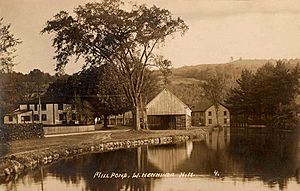 It was first known as Number Six in a line of settlements running between the Merrimack and Connecticut rivers. In 1752, the Masonian Proprietors granted the land to Andrew Todd, who called it Todd's Town. Settled in 1761 by James Peter, it was dubbed New Marlborough by others from Marlboro, Massachusetts. Incorporated in 1768 by Governor John Wentworth, the town was named for Sir John Henniker, a London merchant of leather and fur, with shipping interests in Boston and Portsmouth.

In the 19th century Henniker had a high rate of congenital deafness, and its own sign language, which may have played a significant role in the emergence of American Sign Language.

Farmers found the town's surface relatively even, with fertile soil. Various mills operated by water power on the Contoocook River, including a woolen factory. By 1859, the population was 1,688. But mills in Henniker were closed in 1959 by the Hopkinton-Everett Lakes Flood Control Project.

The Edna Dean Proctor Bridge, a stone double-arch bridge spanning the Contoocook, was built in 1835. Beginning in the late 1800s, the river's scenic beauty attracted tourism. Today, Henniker is a college town and resort area, featuring both skiing and white-water kayaking. The game of paintball originated in Henniker in 1981.

Craney Hill, elevation 1,402 feet (427 m) above sea level and home of Pat's Peak ski area, is in the south. The highest point in Henniker is an unnamed summit near the town's northwest corner, with an elevation of 1,552 ft (473 m). Henniker is drained by the Contoocook River and Amey Brook; the town lies fully within the Merrimack River watershed.

Of the 1,780 households, 30.3% had children under the age of 18 living with them, 49.2% were headed by married couples living together, 9.5% had a female householder with no husband present, and 36.9% were non-families. 26.3% of all households were made up of individuals, and 7.1% were someone living alone who was 65 years of age or older. The average household size was 2.41, and the average family size was 2.91. 541 residents, or 11.3% of the population, lived in group quarters rather than households.

All content from Kiddle encyclopedia articles (including the article images and facts) can be freely used under Attribution-ShareAlike license, unless stated otherwise. Cite this article:
Henniker, New Hampshire Facts for Kids. Kiddle Encyclopedia.