Warner is a town in Merrimack County, New Hampshire, United States. The population was 2,833 at the 2010 census. The town is home to Northeast Catholic College, Rollins State Park and Mount Kearsarge State Forest.

The town's central settlement, where 444 people resided at the 2010 census, is defined as the Warner census-designated place (CDP), and is located along New Hampshire Route 103 and the Warner River. The town also includes the villages of Davisville and Waterloo.

The town was granted in 1735 as Number One by Massachusetts Governor Jonathan Belcher to petitioners largely from Amesbury, Massachusetts. Called New Amesbury, it was part of a line of settlements running between the Merrimack and Connecticut rivers intended to help defend Massachusetts against New France's predations. It was regranted by the Masonian Proprietors in 1749, when it was settled with four houses and a sawmill. Called Jennesstown, it was abandoned and destroyed during the French and Indian War. The town was granted again in 1767 to Jonathan Barnard and others, who called it Amesbury. But on September 3, 1774, it was incorporated as Warner, named after Jonathan Warner, a leading Portsmouth citizen, namesake of the Warner House and relative of Governor John Wentworth. It was one of the last towns established under English provincial rule prior to the Revolution.

Warner developed into a prosperous farming community which produced meats, dairy goods, vegetables, hay and apples. The Warner River and its tributaries provided water power for mills, which in 1832 included twelve sawmills, 6 gristmills, a paper mill and two clothing factories. By 1858, there was also a cabinet manufacturer and bottle manufacturer. In 1885, industries included a bedstead factory, chain factory, woolen cloth factory, iron foundry, tannery and glove manufacturer. On September 9, 1821, the town was hit by a tornado. It leveled houses and forests in a 16-to-18-mile (26 to 29 km) swath of destruction beginning west of Lake Sunapee, through New London and Sutton, over the southwest spur of Mount Kearsarge and ending at the Webster line. The storm killed four people in Warner, seriously injured others and destroyed considerable property.

Each October, on Columbus Day weekend, Warner hosts the annual Fall Foliage Festival, attracting thousands of people from all over New England and beyond.

Mount Kearsarge, elevation 2,937 feet (895 m) above sea level, located in the extreme north of the town, is the highest point in Warner. Two state parks are located on the mountain: Rollins State Park in Warner and Winslow State Park in Wilmot. Mount Kearsarge is a popular hiking destination, due both to its bare, rocky summit, and to the fact that a paved road climbs from Rollins State Park to within a half mile of the summit. The peak is the highest point along the 75-mile (121 km) Sunapee-Ragged-Kearsarge Greenway, a hiking trail which links 10 towns and encircles the Lake Sunapee region of western New Hampshire.

The town is served by Interstate 89 and New Hampshire Route 103. State routes 114 and 127 cross the extreme southwestern and southeastern corners of the town, respectively. It borders the towns of Wilmot, Andover and Salisbury to the north, Webster to the east, Hopkinton and Henniker to the south, Bradford to the west, and Sutton to the northwest.

There were 1,116 households, out of which 29.0% had children under the age of 18 living with them, 56.1% were headed by married couples living together, 7.0% had a female householder with no husband present, and 32.6% were non-families. 29.0% of all households were made up of individuals, and 8.8% were someone living alone who was 65 years of age or older. The average household size was 2.44, and the average family size was 2.92. 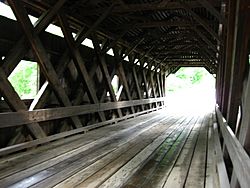 All content from Kiddle encyclopedia articles (including the article images and facts) can be freely used under Attribution-ShareAlike license, unless stated otherwise. Cite this article:
Warner, New Hampshire Facts for Kids. Kiddle Encyclopedia.