Bradford is a town in Merrimack County, New Hampshire, United States. The population was 1,662 at the 2020 census. The main village of the town, where 372 people resided at the 2020 census, is defined as the Bradford census-designated place (CDP), and is located in the northeast part of the town, west of the junction of New Hampshire routes 103 and 114. The town also includes the village of Bradford Center. 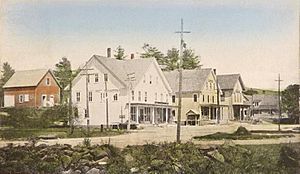 Granted by Governor Benning Wentworth in 1765 to John Pierce and George Jaffrey of Portsmouth, it was settled in 1771 by Dea. William Presbury and family. Three years later other settlers arrived, several of them from Bradford, Massachusetts, after which the town was named New Bradford. Later, it was called Bradfordton, but upon incorporation by the General Court on September 27, 1787, it was officially named Bradford.

Parts of the town are hilly, but the largest portion is in a valley with varied soil. Streams provided water power for watermills. By 1859, when Bradford's population reached 1,341, industries included one woolen mill, one sash, blind and door factory, one wheelwright shop, two sawmills, one gristmill, one tannery, and one clothing mill. In 1850, the Concord & Claremont Railroad opened from Concord to Bradford, which would remain its terminus until the line was extended to Claremont in 1871-1872.

According to the United States Census Bureau, the town has a total area of 36.0 square miles (93 km2), of which 35.3 sq mi (91 km2) is land and 0.7 sq mi (1.8 km2) is water, comprising 1.94% of the town. The village of Bradford is located near the northern border of the town, at the intersection of routes 103 and 114, just north of the Warner River and adjacent to the outlet of Todd Lake. The largest water body in the town is Lake Massasecum, near the town's eastern border.

Of the 667 households, 29.1% had children under the age of 18 living with them, 57.7% were headed by married couples living together, 7.8% had a female householder with no husband present, and 29.4% were non-families. 21.1% of all households were made up of individuals, and 7.1% were someone living alone who was 65 years of age or older. The average household size was 2.47, and the average family size was 2.86.

All content from Kiddle encyclopedia articles (including the article images and facts) can be freely used under Attribution-ShareAlike license, unless stated otherwise. Cite this article:
Bradford, New Hampshire Facts for Kids. Kiddle Encyclopedia.