Kids Encyclopedia Facts
Not to be confused with Dover, New Hampshire or Andover, Hampshire.

Andover is a town in Merrimack County, New Hampshire, United States. The population was 2,406 at the 2020 census. Andover includes the villages of Cilleyville, Potter Place, East Andover, and West Andover, in addition to the town center. The town is home to Ragged Mountain State Forest and Proctor Academy, a private coeducational preparatory school.

Settled in 1761, the town was originally named "Emerisstown". In 1746 it was granted to Edward Brown and others as "New Breton" or "New Britton", having been granted primarily to soldiers who had taken part in the 1745 capture of Cape Breton during hostilities with the French in Canada. Among those soldiers was their regimental surgeon, Dr. Anthony Emery, a friend of Samuel Phillips, Jr., who in 1778 founded the Phillips Andover Academy in Andover, Massachusetts. "New Breton" would be incorporated as "Andover" in 1779, the year Phillips Andover was completed. 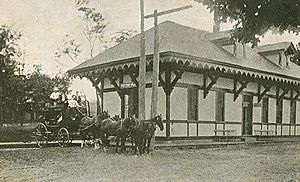 In 1822, an academy was established in Andover, although it would close in 1828. Another school was founded in 1848 that would become Proctor Academy, the prestigious institution around which the town's economy is based. Andover is noted for its antique shops, Greek Revival architecture, and two covered bridges. Potter Place Railroad Station, built in 1874 by the Northern Railroad, is listed on the National Register of Historic Places, and today serves as a museum for the Andover Historical Society.

According to the United States Census Bureau, the town has a total area of 41.4 square miles (107.3 km2), of which 40.5 sq mi (105.0 km2) is land and 0.89 sq mi (2.3 km2) is water, comprising 2.14% of the town. Andover is drained by the Blackwater River. Bradley Lake is in the south. Ragged Mountain, elevation 2,286 feet (697 m) above sea level, is on the northern boundary. The northern slopes of Mount Kearsarge occupy the southernmost part of town and contain the town's highest point, 2,460 ft (750 m) above sea level. Andover lies fully within the Merrimack River watershed.

Andover includes the villages of East Andover, West Andover, Cilleyville, and Potter Place, named for Richard Potter, an African-American illusionist who lived there in the early 19th century. 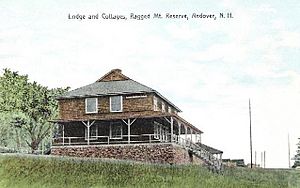 There were 823 households, out of which 33.7% had children under the age of 18 living with them, 61.7% were married couples living together, 7.7% had a female householder with no husband present, and 26.0% were non-families. 20.5% of all households were made up of individuals, and 7.4% had someone living alone who was 65 years of age or older. The average household size was 2.55 and the average family size was 2.90. 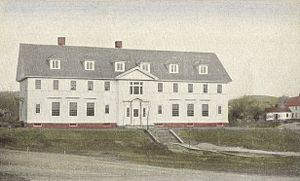 All content from Kiddle encyclopedia articles (including the article images and facts) can be freely used under Attribution-ShareAlike license, unless stated otherwise. Cite this article:
Andover, New Hampshire Facts for Kids. Kiddle Encyclopedia.