Its name is recorded in Anglo-Saxon in 955 AD as Andeferas, and is thought to be of Celtic origin: compare Welsh onn dwfr = "ash(tree) water".

Andover's first mention in history is in 950 when King Edred is recorded as having built a royal hunting lodge there. In 962 King Edgar called a meeting of the Saxon 'parliament' (the Witenagemot) at his hunting lodge near Andover.

Of more importance was the baptism, in 994 of a Viking king named Olaf (allied with Danish king Sweyn Forkbeard). The identity of that man was either Olav Trygvason or Olof Skötkonung. The baptism was part of a deal with King Ethelred II of England ("The Unready") whereby he stopped ravaging England and returned home. Olav Tryggvason became king of Norway in 995 and tried to convert his country to Christianity before his death in the Battle of Svolder in 1000. Olof Skötkonung was already king of Sweden and became its first Christian king and began c. 995 to mint Sweden's first coins with the help of English expertise.

At the time of the Domesday Book (1086) Andover had 107 male inhabitants and probably had a total population of about 500. It was quite a large settlement by the standards of the time. (Most villages had only 100 to 150 people). Andover also had 6 watermills which ground grain to flour. 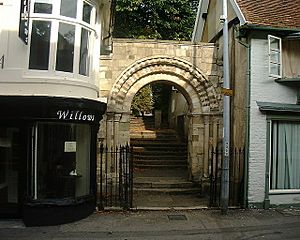 Norman arch c. 1150. All that remains of the Old Church of St Mary.

In 1175 King Richard I sold Andover a charter granting the townspeople some rights, forming a merchant guild which took over the government of the town. The members elected two officials called bailiffs who ran the town. In 1201 King John gave the merchants the right to collect royal taxes in Andover themselves. In 1256 Henry III gave the townspeople the right to hold a court and try criminals for offences committed in Andover. Andover also sent MPs to the parliaments of 1295 and 1302–1307. The town was ravaged by two serious fires, one in 1141 and another in 1435.

Andover remained a small market town. Processing wool appears to have been the main industry and street names in the area of the town known as "Sheep Fair" commemorate this. A weekly market, and an annual fair were held. 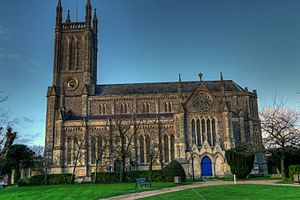 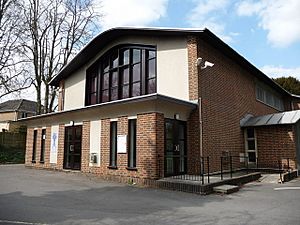 As well as the Church of St Mary the town had a priory and a hospital run by monks, dedicated to St John the Baptist, and also a lepers hostel to St Mary Magdalene. In 1538 during the Reformation Henry VIII closed the priory and the hospital. In 1571 a free school for the boys of Andover was established. This in time became Andover Grammar School, and is now John Hanson Community School. (Which has since been demolished and rebuilt not far from two primary schools in the town. The site which was once John Hanson, now acts as a housing district.)

In 1599 the town received a new charter from Elizabeth I. The merchants guild was made a corporation and the number of annual fairs was increased from one to three. Like other towns Andover suffered from outbreaks of plague. There were outbreaks in 1603-5, 1625–6 and 1636.

During the 18th century, being situated on the main Exeter – Salisbury – London road Andover became a major stopping point on the stagecoach routes, more than 30 stagecoaches passing through the town each day. In 1789 a canal to Southampton was opened, though this was never a commercial success and closed in 1859. In 1836 the Borough established a small police force, although this was for the most part just two constables and a gaoler.

Andover was linked to Basingstoke and thus to London by railway when the Andover junction station was opened on 3 July 1854; this railway also linking the town to Salisbury. The town was also linked by railway to Southampton, built on the bed of the canal, but this was closed down in 1964. The land, together with the adjacent gasworks and P. M. Coombes wood yards, was then sold to the TSB Trust Company who later built their headquarters there.

The population grew from 3,304 in 1801 to 5,501 in 1871. During the 19th century the town acquired all the usual additions, a theatre in 1803, gas street lighting in 1838, a fire station and cottage hospital in 1877, a swimming pool opened in 1885 and a recreation ground opened in 1887. A water company was formed in 1875 to provide piped water to the town and a system of sewers and drains was built in 1899–1902. The public library opened in 1897. Despite this burgeoning of the amenities of the town in 1845 a notorious scandal involving the hardships endured by the inmates of the workhouse led indirectly to reform of the Poor Law Act. The town was one of the boroughs reformed by the Municipal Reform Act 1835. 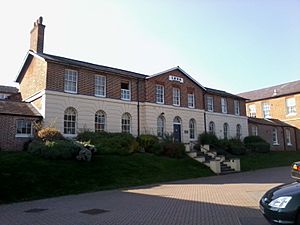 The woollen industry had declined but new industries took its place. Taskers Waterloo Ironworks opened at Anna Valley in 1809 and flourished. Many examples of the machinery produced by Taskers can be seen at the Milestones Museum in Basingstoke.

The town's largest employer is the Ministry of Defence. RAF Andover was opened on Andover Airfield, to the south of the town, during the First World War and became the site of the RAF Staff College.

In 1926, the Andover War Memorial Hospital was opened by Field Marshall Allanby. The hospital currently provides inpatient rehabilitation, day hospital services, a minor injury unit and an outpatient unit, and is operated by Hampshire Hospitals NHS Foundation Trust, with some services being provided by Southern Health NHS Foundation Trust.

In 1932 Andover gained a new industry when the printers for Kelly's Directory moved to the town. Slowly the town grew from about 11,000 and by 1960 had a population of about 17,000, because already some Londoners were being housed in the first of the council houses/flats being constructed.

During the Second World War the RAF Staff College was the headquarters of RAF Maintenance Command, and gained a unique place in British history, as the first British military helicopter unit, the Helicopter Training School, was formed in January 1945 at RAF Andover. The airfield is no longer in use although the RAF retains a link to the area through the presence of 1213 (Andover) Squadron, Air Training Corps. When the RAF left the site became the Headquarters of the Quartermaster General and later Logistics Executive.

In 2001, the Defence Logistics Organisation (DLO) was formed and Andover became one of its major sites. Since 2012, the site has been the home of Army Headquarters. The Armed Forces Chaplaincy Centre is based locally at Amport House, as is the Army Air Corps Centre and the Museum of Army Flying at Middle Wallop.

Major industries include Twinings the tea and coffee firm, Ducal Pine Furniture (until they closed in 2003), Thomson International Publishers, who produce the Pitkin Guides to be found in many churches and other notable buildings, financial institutions such as Simplyhealth and Lloyds Banking Group, and the Stannah Group, whose HQ is also in the town. Among the proposals in the council's Borough Local Plan 2006 are plans to develop the former site of RAF Andover to Class B1, B2 and B8 uses.

In 1950s the Borough Council was approached by the Greater London Council to become an overspill town, to build houses and take people and industry relocated from the overcrowded capital. Some contend that had the old Borough Council still been in charge this would never have been agreed. But it was, and in 1961 the plan was drawn up to expand to a population of some 47,000 by 1982, with 9,000 new homes to be built.

The first new council houses were ready by 1954 and by 1981 the population had risen to 51,000. A bypass, industrial estates and a new shopping centre in the town centre, called the Chantry Centre, were all built and the town's character changed completely. The new council houses proved to be very badly built. It seemed that the local council would have to foot the enormous bill for reconstruction, but after starting legal action against the Greater London Council a settlement was achieved, in which the GLC paid a large sum of money to the local council, which started a programme of refurbishment that finished in 1995.

The Borough Council and Andover Rural District Council were abolished in the local government reorganisation of 1974, and replaced by Test Valley Borough Council, which included the land down to the edge of Southampton in the south, quite a rural area apart from Andover. Light industry is still the main employer. Situated about 1 hour 5 minutes from London by train there are also quite a few who commute to the capital to work. The tensions between town and country and the "old" and "new" still exist in some measure, and in the future more expansion is planned. Today the population of Andover is over 52,000 and it is one of four Major Development Areas in Hampshire, identified for large housing growth. Plans are in place to build 2,500 homes to the northeast of the town. Andover became an unparished area in Test Valley. After a considerable local campaign a parish council of 19 members was elected in May 2010.

The Town Museum, based in the old John Hanson Free School building (before becoming a grammar school), has a Museum of the Iron Age added in 1986 which houses the finds from excavations at nearby Danebury Hill Fort. 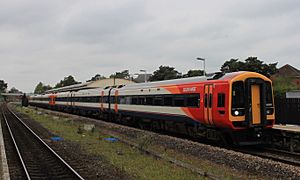 Andover has one railway station situated in the town run by South West Trains. From Andover railway station trains run to Salisbury, Yeovil Junction, Exeter St David's, Basingstoke, Woking and London Waterloo. Andover is bounded to the south by the A303. In 2002 Andover received the first Cango bus network. 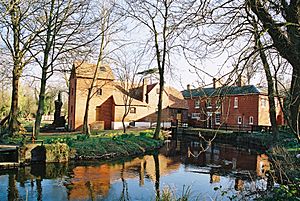 Watermills have played an important part in Andover's history. The Domesday Book of 1086 provides the earliest record of watermills in Andover, which identifies six mills.

Rooksbury Mill is one of the few surviving mill buildings in Andover. The existence of Rooksbury Mill is first recorded by name in the 17th century. Functioning as a flour mill, it has passed through a succession of owners. Milling ceased in the early 20th century, after which the mill building went through a series of uses including being used as a small theatre. Test Valley Borough Council sold the building in 2002, shortly after it had been devastated following an arson attack. The new owners, Anthony and Sarah de Sigley, restored the building in 2003, rebuilding much of the original structure.

A large flour mill, McDougalls, is situated close to the railway station. 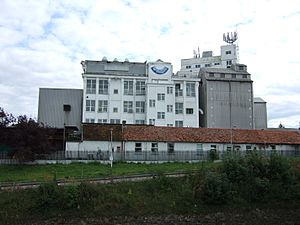 Andover, in common with much of the UK, experiences a maritime climate type, reflected in its limited temperature range and lack of rainy/dry seasons, although rainfall does tend to peak in winter and reach a minimum in summer. The nearest met office weather station to Andover is Leckford, about 5 miles south of the town centre.

Total rainfall averages 805mm per year, with at least 1mm falling on 124 days. All averages refer to the 1971-00 observation period.

All content from Kiddle encyclopedia articles (including the article images and facts) can be freely used under Attribution-ShareAlike license, unless stated otherwise. Cite this article:
Andover, Hampshire Facts for Kids. Kiddle Encyclopedia.