The River Test is a chalk stream in Hampshire in the south of England. It rises at Ashe near Basingstoke and flows southwards for 40 miles (64 km) to Southampton Water. Settlements on the Test include the towns of Stockbridge and Romsey. Below the village of Longparish, the river is followed by the Test Way, a long-distance footpath.

Much of the Test is a 438-hectare (1,080-acre) biological Site of Special Scientific Interest. It is part of the Solent and Southampton Water Ramsar site and Special Protection Area. The upper reaches are used for fly fishing for trout.

Recorded forms are Terstan from 877 and 901, Tarstan stream in 1045, Terstein 1234, and Test in 1425. If Common Brittonic, not Old English, all related dictionaries show three suitable words beginning with Tre- and none with extremely rare Ter-. There is precedent to such metathesis: as for the river Tern in the far west, from tren 'strong'. If so it most likely relates to the Welsh tres (tumult, commotion, contention, uproar) or trais (force, might in older Welsh). A close set of words (diversely conjugated and pronounced) in Old English is (f)irst(en), the meaning of which is as at present, first. 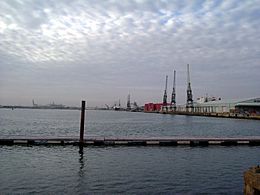 The Test is tidal in Southampton and is lined with quays

The river rises near the village of Ashe, 10 km to the west of Basingstoke (at ), and flows west through the villages of Overton, Laverstoke, and the town of Whitchurch, before joining with the Bourne Rivulet at Testbourne and turning in a more southerly direction. It then proceeds through the villages of Longparish and Middleton to Wherwell and Chilbolton, where the Rivers Dever and Anton join.

From Chilbolton the river goes through the villages of Leckford, Longstock, Stockbridge and Houghton to Mottisfont and Kimbridge, where the River Dun joins the flow. From here the village of Timsbury is passed, then through the grounds of Roke Manor before reaching the town of Romsey. On the western edge of Romsey, Sadler's Mill, an 18th-century watermill, sits astride the River Test.

South of Romsey, the river passes the country house of Broadlands, and then Nursling, once the site of a Roman bridge. Finally the river is joined by the River Blackwater and soon becomes tidal, widening out into a considerable estuary that is lined on its northern bank by the container terminals and quays of the Port of Southampton. The Test estuary then meets that of the River Itchen and the two continue to the sea as Southampton Water.

Between Chilbolton and Redbridge, the river was once paralleled by the Andover Canal, which was itself converted to a railway in 1865, and then in turn abandoned. Most traces of the canal have disappeared, although the remains of a stretch can still be seen between Timsbury and Romsey.

This chalk stream has one of the richest fauna and flora of any lowland river in England. More than 100 species of flowering plant have been recorded along its banks and 232 invertebrate taxa in the river. It is also important for wetland birds, with breeding species including kingfishers, grey wagtails and little grebes.

Water quality of the River Test in 2019:

There is a brief mention in You Only Live Twice, Ian Fleming's eleventh novel in his James Bond series, with James Bond's boss M looking forward to two weeks' trout fishing on the Test.

The river plays a part in Richard Adams' 1972 novel Watership Down.

When the Watership rabbits are pursued by an enemy force, one rabbit carries out a plan which leads to their successful escape down the Test on a punt. In the text, we are told that this plan would not have been possible on most rivers, but the Test's smooth-flowing, weed-free nature makes it an exception. The punt becomes lodged on a low bridge, and the surviving rabbits are forced to swim under the bridge to the riverbank.

The following are the named tributaries of the River Test, listed in order upstream from Southampton Water.

All content from Kiddle encyclopedia articles (including the article images and facts) can be freely used under Attribution-ShareAlike license, unless stated otherwise. Cite this article:
River Test Facts for Kids. Kiddle Encyclopedia.