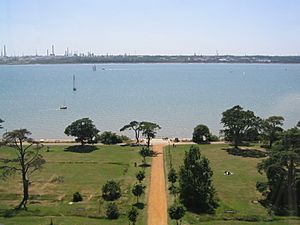 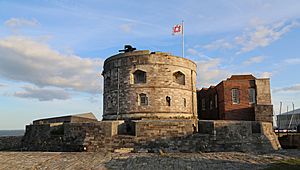 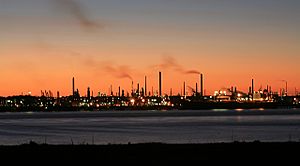 Southampton Water is a tidal estuary north of the Solent and the Isle of Wight in England. The city of Southampton lies at its most northerly point. Along its salt marsh-fringed western shores lie the New Forest villages of Hythe and "the waterside", Dibden Bay, and the Esso oil refinery at Fawley. On the slightly steeper eastern shore are the Southampton suburb of Weston, the villages of Netley and Hamble-le-Rice, and the Royal Victoria Country Park.

Together with the Solent, Southampton Water is world-renowned for yachting. It served as one of the sailing and motorboating venues for the 1908 Summer Olympics.

Geographically, Southampton Water is classified as a ria (and is the bottom part of the river Test), or drowned valley, of the English Channel. It was formed by the rivers Test major, Itchen and Hamble minor which flow into it, and became an inlet of the sea at the end of the last ice age when sea levels rose, flooding many valleys in the south of England. In particular, it is likely that Southampton Water formed partly due to the submerging of the River Solent which previously flowed through the area, and of which the River Test, River Itchen and River Medina are thought to be tributaries.

Southampton's emergence as a major port, and particularly as a port handling very large vessels, depended partly on certain geographical features of Southampton Water. Its depth, even in its undeveloped state, was generous; this depth of water has been increased over the years with comparative ease since the soft silt of the river-bed allows for easy dredging. An additional factor is the phenomenon of the "double tide", which results in unusually prolonged periods of high water. This greatly facilitates the movements of very large ships.

Southampton Water is an estuary with major potential for land use conflicts. An area of urban development (the Waterside) runs in the narrow band of land between Southampton Water and the New Forest National Park. Villages such as Marchwood, Hythe, Dibden Purlieu, Holbury and Fawley have all experienced significant growth.

Between Hythe and Marchwood, an area of reclaimed land – Dibden Bay – was the site of a proposed port expansion by Associated British Ports. This was argued to be essential for the continued economic development of the Port of Southampton but the development was vigorously opposed by conservation groups. The intertidal marshlands of Dibden Bay have international significance (Ramsar status).

The planning enquiry eventually rejected the application from Associated British Ports recommending that the environmental value of the site could not be overruled when there were alternative sites for port expansion in southern England which had not yet been fully explored. The government accepted the recommendations of the planning inspector in April 2005.

In 1925 American hard-shelled clams were introduced into the River Test in an area warmed by cooling water discharge of Southampton Power Station in an attempt to breed them to allow them to be used as eel bait. Since their introduction the clams have spread through Southampton Water and into Portsmouth Harbour and Langstone Harbour.

All content from Kiddle encyclopedia articles (including the article images and facts) can be freely used under Attribution-ShareAlike license, unless stated otherwise. Cite this article:
Southampton Water Facts for Kids. Kiddle Encyclopedia.