The River Itchen is a chalk stream in Hampshire in south east England. It rises to the south of New Alresford and flows 26 miles (42 km) to meet Southampton Water below the Itchen Bridge. The Itchen Navigation was constructed in the late 17th and early 18th centuries to enable barges to reach Winchester from Southampton Docks, however it ceased to operate in the mid-19th century and is largely abandoned today.

The river is noted as one of the world's premier chalk streams for fly fishing, amenable to dry fly or nymphing. The local chalk aquifer has excellent storage and filtration and the river has long been used for drinking water. Watercress thrives in its upper reaches.

Much of the river from its source to Swaythling is classified as a 748.5-hectare (1,850-acre) biological Site of Special Scientific Interest (SSSI), and a Special Area of Conservation, of which the 9-hectare (22-acre) Hockley Meadows nature reserve is a part. The Itchen estuary is part of the separate Lee-on-The Solent to Itchen Estuary SSSI.

Etymology and other name

The name is likely from a Brittonic language and in meaning unknown. The settlement of Itchen Abbas, before its abbot's ownership, is transcribed by early Middle English orthography which used the letter c followed by e or i to denote the sound and an e invariably after an n to avoid those down strokes being ambiguous thus, as Icene in the Domesday Book of 1086. The name, in upper parts was once seen as interchangeable with the contributory Alre.

The source is north of Kilmeston, in that civil and ecclesiastical parish. The river flows north, through Cheriton village and east of overwhelmingly agricultural Tichborne village, before joining up with tributaries the River Alre and Candover Brook immediately north-west of the town of New Alresford. The river then carves its way west passing the villages of Avington, Itchen Stoke, Itchen Abbas, Martyr Worthy, Easton, and Abbots Worthy; to enter the cathedral and arts-rich city of Winchester it crosses Winnall Moors to turn south for its remainder. 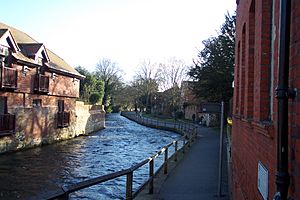 "The Weirs" in Winchester.

It flows in anabranches through the city, some close enough to Winchester Cathedral to cause great problems to the foundations in the past. The main channel flows through Winchester City Mill and to the east of the city's Roman walls, along a promenaded reach known as "The Weirs".

It waters or can overflow into water-meadows, passing: the Hospital of St Cross; the villages of Twyford; Shawford; between the town of Eastleigh and the village of Bishopstoke; and through Itchen Valley Country Park before reaching the northern suburbs of Southampton at Mansbridge. Between Winchester and Mansbridge, sections were deepened or widened for the long-disused Itchen Navigation, and the former towpath forms part of the Itchen Way.

Monks Brook flows into the Itchen at Swaythling, and the river then passes under Woodmill Bridge and becomes tidal. Four further bridges cross it before the Test estuary in Southampton Water:

Between the latter two, the river passes St Mary's Stadium, the home of Southampton F.C.. As the river meets Southampton Water it passes several rowing clubs, sailing clubs and the major mixed-development on the left bank in Woolston, called Centenary Quay.

The lower part of the river is an important yachting centre and contains several marinas, sailing centres and boatyards. From seaward they are:

Above Northam Bridge, the limit of navigation for masted craft, are the Vespasian Road boatyard and numerous small establishments.

The SSSI covers the river and its banks, with fen, flood meadows, wet woodland and swamp. It has populations of the nationally rare southern damselfly and white-clawed crayfish. Other fauna include otters, water voles, Atlantic salmon, shovelers and Cetti's warblers.

Water quality of the River Itchen in 2019:

All content from Kiddle encyclopedia articles (including the article images and facts) can be freely used under Attribution-ShareAlike license, unless stated otherwise. Cite this article:
River Itchen, Hampshire Facts for Kids. Kiddle Encyclopedia.