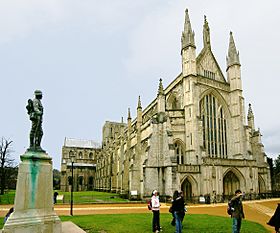 Winchester Cathedral is the longest mediaeval church in the world, 169 metres (554 ft). 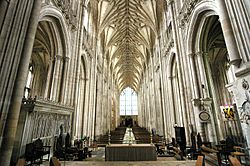 The nave of Winchester, gives an impression of height as well as length, but at 23.7 metres (78 ft) it is half the height of Beauvais.

Winchester Cathedral is a mediaeval Anglican church in Winchester, Hampshire. It is the seat of the Bishop of Winchester.

The cathedral has the longest nave and overall length of any Gothic cathedral in Europe. By contrast, the interior height of the nave vault at 78 feet is about half that of Beauvais Cathedral in France.

Built between 1079 and 1532, Winchester Cathedral has had an unusual architectural history. The exterior, apart from the modified windows, gives the impression of a massive Norman building and indeed, when first completed, the Norman Cathedral was second only in size to Saint Peter's Basilica in Rome. However, the west front is now Perpendicular, with its huge window filled with fragments of medieval glass. Sadly this glass window was destroyed by the Roundheads.They also messed up the bones of some of the most important rulers. Inside, only the crypt and the transepts have retained their Norman appearance. The spectacular Perpendicular nave with its tall arcade arches and strong vertical emphasis has been literally carved out of the original Norman interior. The Very Rev. Norman Sykes wrote of it “Well might the visitor who enters … by the west door gasp with amazement". Winchester is also famous for its carved wooden fittings of many different periods.

Important events which took place at Winchester Cathedral include:

All content from Kiddle encyclopedia articles (including the article images and facts) can be freely used under Attribution-ShareAlike license, unless stated otherwise. Cite this article:
Winchester Cathedral Facts for Kids. Kiddle Encyclopedia.