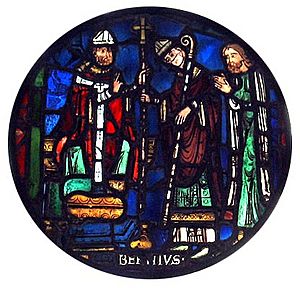 Birinus being made a bishop by Archbishop Asterius.

Birinus ( 650), also St. Birinus was a missionary to Wessex and the first Bishop of Dorchester. His is celebrated on December 3rd.

Birinus may have been a Lombard by birth. He was sent by Pope Honorius I to help convert pagans in Anglo-Saxon England. The pope first sent him to Genoa. There Archbishop Asterius of Milan consecrated Birinus as a bishop. Birinus arrived in southern Britain c. 634. He had planned to go to the midlands of England to preach there. But when he found the Gewisse in Wessex were completely pagan, he decided to stay with them. He began to convert the Gewisse (West Saxons) to Christianity. In 635 King Cynegils of Wessex was baptized by Birinus and King Oswald of Northumbria agreed to be his Godfather. This may have been a condition of the marriage between Oswald and Cynegils's daughter, Cyneburh. He gave Bishop Birinus the city of Dorchester and several churches so he could convert the pagans in Wessex. In c. 647–48 Birinus founded a church at Winchester which later became Winchester Cathedral. Birinus died in 650. He was buried at Dorchester.

After 660 there were no more West Saxon Bishops at Dorchester. Along with part of Berkshire it was taken over by Mercia. The new see for Wessex was now at Winchester. Some time around 690–700 Bishop Hedda of Winchester had the relics (bones) of St. Birinus moved from Dorchester to Winchester. Up to this time Bishop Birinus had been considered a minor saint. In 1223 monks of Dorchester abbey located the tomb of a former Bishop. The body was dressed in the garments and tunic of a bishop so they believed it was St. Birinus. At the time of the discovery miracles were claimed. One claim was that a dumb child could suddenly speak English and French. The monks sent their findings to Rome. The pope wrote to Stephen Langton, the Archbishop of Canterbury asking him to manage the translation. But a problem caused the ceremony to be delayed. Archbishop Langton discovered the body had already been moved to Winchester c. 700. Both Dorchester and Winchester claimed to have the relics of Bishop Birinus. For that reason two feast days were observed for him, December 3rd and 4th. The Catholic Church recognizes December 3rd. A shrine was created for him in the 14th century. It was later destroyed, but it has been rebuilt since.

All content from Kiddle encyclopedia articles (including the article images and facts) can be freely used under Attribution-ShareAlike license, unless stated otherwise. Cite this article:
Birinus Facts for Kids. Kiddle Encyclopedia.