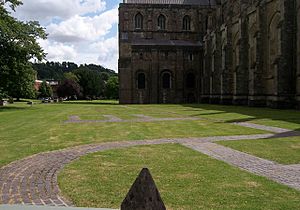 The Old Minster was the Anglo-Saxon cathedral for the diocese of Wessex and then Winchester from 660 to 1093. It stood on a site immediately north of and partially beneath its successor, Winchester Cathedral.

The old legend that the Minster was built in the 2nd century for the non-existent King Lucius of Britain is erroneous. The stone minster was constructed in 648 for King Cenwalh of Wessex and Saint Birinus. It became the diocesan cathedral in 660. It was enlarged and redecorated over the years and Saint Swithun was buried outside it in 862. By the 10th century, the Minster was the priory church of St. Swithun's Priory, a community of monks living under the rule of St Benedict.

In 901, the New Minster was built next to it, so close in fact that the singing of the monks inside each is said to have become hopelessly intermingled with the other. Saint Æthelwold of Winchester and by his successor, Saint Alphege, almost completely rebuilt the minster on a vast scale during their monastic reforms of the 970s. Saint Swithun's body was taken into an indoor shrine in what had become the largest church in Europe. However, after the Norman conquest of England, Bishop Walkelin built a new cathedral alongside and the Old Minster was demolished in 1093. Many of the kings of Wessex and of England (including Egbert, king of Wessex from 802 until his death in 839), as well bishops, had been buried in the Old Minster, so their bodies were exhumed and re-interred in the new building.

The Old Minster was excavated in the 1960s. The outline of the building now is laid out in brickwork in the churchyard adjoining Winchester Cathedral. Saint Swithun's first grave is clearly marked. Finds from the site may be seen in the Winchester City Museum. The bones of the monarchs removed to the cathedral are now housed in mortuary chests around the choir.

All content from Kiddle encyclopedia articles (including the article images and facts) can be freely used under Attribution-ShareAlike license, unless stated otherwise. Cite this article:
Old Minster, Winchester Facts for Kids. Kiddle Encyclopedia.