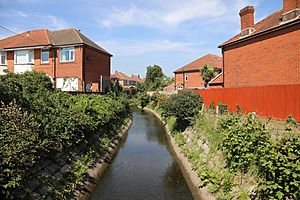 Tanner's Brook is an 7-kilometre (4.3 mi) river that rises in North Baddesley and flows to Southampton Water. The brook's name comes from a 19th-century tannery that stood close to where the river passed under Millbrook Road in Millbrook.

The longest tributary of Tanner's Brook is Hollybrook which joins it in Shirley. Above where the two streams join they both flow through sections of Lordsdale Greenway. On its lower course Tanner's Brook flows through Millbrook and is probably the brook that gives Millbrook its name. Within Millbrook a small section of the river was culverted during the construction of the Salisbury and Southampton Canal. This was filled with concrete in 1964 as part of a flood relief project.

All content from Kiddle encyclopedia articles (including the article images and facts) can be freely used under Attribution-ShareAlike license, unless stated otherwise. Cite this article:
Tanner's Brook Facts for Kids. Kiddle Encyclopedia.