Shirley is a district on the Western side of Southampton, England. Shirley's main roles are retailing and residential. It is the most important suburban shopping area in the west of the city. Housing is a mixture of council houses in the centre of the district surrounded by private housing, with larger suburban houses concentrated in Upper Shirley. Shirley is separated from Highfield by Southampton Common, a large green park-like area which sees many dog-walkers, joggers.

It is part of the Southampton Test constituency, with Alan Whitehead as Member of Parliament.

The place-name Shirley commonly means "bright clearing", from the Old English scir (bright) and leah (cleared land in a wood). Shirley is recorded as a manor with a mill in the Domesday Book; the mill standing to the west of the present Romsey Road/Winchester Road junction, at the confluence of the Hollybrook and Tanner's Brook streams. Shirley Mill had three large ponds, to the north of Winchester Road. Only one of those three mill ponds remains today, accessible by following the Lordswood Greenway.

In 1228, Nicholas de Sirlie, lord of Shirley, surrendered rights to Southampton Common in return for a small payment and the agreement that the Burgesses of Southampton had no rights of common over the land that would later become Shirley Common. In the nineteenth century an iron works was built, which was converted into a brewery in 1880 and subsequently into a laundry at the beginning of the 20th century. The laundry was owned by Royal Mail and used to service the mail ships visiting Southampton.

The stream from the mill crossed over the Romsey Road until it was culverted under the major traffic junction which stands there, and continues to the Test to the east of modern Tebourba Way, open in parts and culverted in others. A second mill was built at what is now the junction of Oakley Road and Tebourba Way. This site was later a paint factory known as Atlantic Works and mill buildings survive in commercial use on both sides of Oakley road astride the old mill leat.

The district grew rapidly in the 1830s following the enclosure of Shirley Common. The Hampshire Chronicle announced in April 1830 that "Several elegant villas are about to be erected on Shirley Common". On the 28 November 1830 in the context of the Swing riots there was a non violent protest in Shirley and Millbrook by labourers demanding increased wages.The parish church was built in 1836. A council estate was built in the 1960s to replace relatively dense terraced housing.

Shirley and Freemantle Local Board of Health 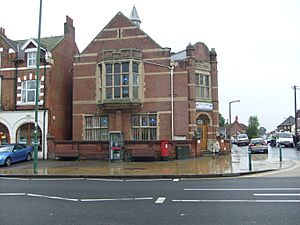 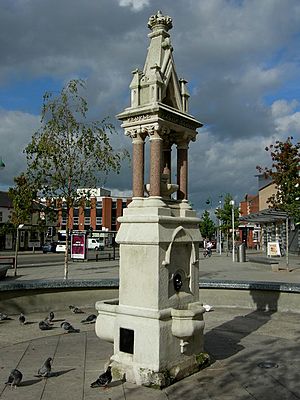 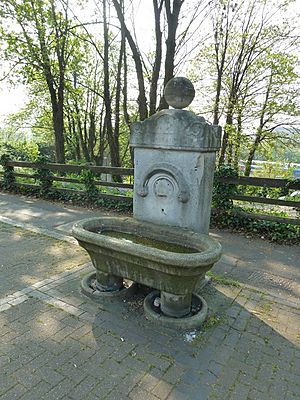 The Shirley Local board of health was established in 1853. It merged with Freemantle in 1880. Shirley and Freemantle Urban District Council was formed on 2 January 1895 but was abolished on 8 November 1895 when the district became a suburb of Southampton.

The Board originally met in Church Street but moved to Ravenswood in July 1885. Ravenswood had previously been a house: the contents were auctioned off in 1870 following the bankruptcy of Mr. Gabriel Scott who was, however, still living there in 1876. It later became the headquarters of the Seventh-day Adventist Church in the British Isles. The Board meetings held at Ravenswood are reported in detail in the Hampshire Advertiser. Regular subjects for discussion included the state of the roads, especially surfacing by rolling gravel and the introduction of kerbstones; drainage and sewerage; street lighting; wells; slaughterhouses; and infectious diseases. One meeting in 1893 received statistics concerning scarletina, typhoid fever, diphtheria, erysipelas, and smallpox. Smallpox was a particular issue. At another 1893 meeting, concern was expressed about Southampton's smallpox hospital ship being anchored off Freemantle where children played on the beach. The Board received reports from the South Stoneham Poor Law Union because that Union's responsibilities included "the parish of Millbrook" which "includes the hamlets of Hill, and Sidford, the tything of Millbrook, and the village of Shirley."

In 1887 the Board constructed a drinking fountain to celebrate the Golden Jubilee of Queen Victoria. Originally in Shirley High Street, the fountain has now been incorporated into the shopping precinct. The fountain is Grade II listed. Another was constructed at Fourposts.

By 1892, Shirley and Freemantle Local Board of Health were considering building new offices on the Brooklyn estate, which the 1860s Ordnance Survey map shows to be consistent with the extant building's location. Plans were submitted in 1892 and a Public inquiry was held in January 1893. The building has a foundation stone laid by W.A.Killby esq, chairman of the Shirley and Freemantle Local Board, 12 June 1893. The stone also mentions that H.J.West was the architect and F.Osman was the contractor. Speeches at the laying ceremony were used to attempt to justify the expense of the building, criticise Southampton for polluting the Itchen, and express resistance to Southampton ever annexing Shirley. The report in the Hampshire Advertiser also describes the building which would include an upstairs boardroom 30 ft long by 25 ft wide, and downstairs offices for the clerk, surveyor, inspector of nuisances, and the collector (of revenues). A dinner to celebrate the opening of the new building was held on 12 January 1894. After the move, Ravenswood appears to have been used again by the Seventh-day Adventist church.

The Local Board became the Urban District Council in 1895 with the same membership. It dealt with similar issues, for example the 27 November meeting included a report about "how Shirley and Freemantle are drained" but actually about problems with the system. It was to become preoccupied with the question of "Annexation" by Southampton which had recently been raised in some detail at a special meeting of the former Local Board on 28 November 1894. The Hampshire Advertiser report of the first UDC meeting, held on 2 January 1895, ended with "The 'Annexation' Scheme: At a special meeting of the Board, held on Saturday, it was resolved that one or two counsel be retained to represent the district at the forthcoming inquiry relative to the extension of the Southampton Borough boundaries." There was much concern about the impact of annexation on the rates, particularly given the incomplete state of mains water and drainage, but it was announced at 6 July meeting that these had been resolved. Subsequent UDC meetings were no less skeptical and the Hampshire advertiser reports continue to use the word "annexation" throughout.

As abolition approached, the 16 October 1895 meeting started late and was brief. The subsequent meeting reported on 26 October was even briefer and concludes with "This was all the business". 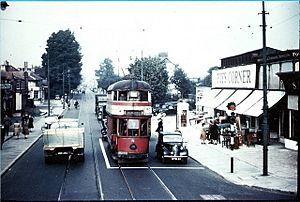 Tram from Shirley in Freemantle

In the late 1800's the Didcot, Newbury and Southampton Railway planned to build a railway through Shirley, to a new station near Sothampton's Royal Pier. In the event the line was only built as far as Winchester Chesil Station. Deposited plans showed the line continuing South via Twyford, Chandlers Ford, Chilworth, Lordswood, the East side of Dale Valley, under Winchester Road, through land now occupied by Shirley Junior School and on to the East side of Hill Lane near Archers Road where there is a surviving (but never used) embankment to the North of Commercial Road. A story grew up that St James' Park, Southampton, in Shirley was to have been a local railway station (still repeated in books) but plans deposited with Hampshire Record Office for this and later versions of the same scheme show this not to have been the case, with the intended route of the railway passing to the North East. Although some land was purchased and work undertaken, the large depression in which St James Park sits was in fact caused by gravel extraction, although there are Didcot, Newbury and Stratton (formerly Station) Roads to the South of this park. Station Road did contain a Police Station at one time. Nothing came of this or later similar schemes which finally petered out prior to World War One.

From 1879, a route of Southampton Corporation Tramways operated from Southampton via Fourposts Hill along Shirley High Street. It ran until 1949 as far as what is now the current Shirley Precinct. This stop is still known as "Shirley Terminus" to some residents when using bus services. A large Tram depot was located in Carlisle Road, later being used as a bus depot until demolition in the 1980's.

All content from Kiddle encyclopedia articles (including the article images and facts) can be freely used under Attribution-ShareAlike license, unless stated otherwise. Cite this article:
Shirley, Southampton Facts for Kids. Kiddle Encyclopedia.