The cemetery has had various titles including The Cemetery by the Common, Hill Lane Cemetery and is currently known as Southampton Old Cemetery. An Act of Parliament was required in 1843 to acquire the land from Southampton Common. It covers an area of 27 acres (11 ha) and the total number of burials is estimated at 116,800. Currently there are 6 to 8 burials a year to existing family plots.

On 9 November 1841, Southampton Town Council resolved "that the Town Clerk be directed to give notice of an application to parliament at the next session for establishing a cemetery or burial ground on part of Southampton Common". The town council approached John Claudius Loudon. He was a well known landscaper, designer of arboretums and cemeteries including Histon Road Cemetery at Cambridge and Bath Abbey Cemetery. Loudon, normally based in London, had been staying on the Isle of Wight whilst his wife was writing a book. The damp sea air had a debilitating effect on his health and he moved to take temporary lodgings in Southampton. Southampton Town council had no previous experience of laying out a cemetery and was pleased that Loudon was conveniently available. They paid him £37 for his services, but decided not to use his proposed layout. The Bishop of Winchester was not willing to concede that the proposed Anglican chapel would adjoin a nonconformist chapel.

As was customary in the planning of early cemeteries, the council held a competition and asked for suggested layouts to replace the one made by Loudon. The design of William Rogers a local nurseryman and councillor was accepted and he was awarded the contract.

The cemetery was opened on 7 May 1846 when the Bishop of Winchester consecrated part of the grounds. A section was left unconsecrated for the "Dissenters" (non-conformists) and agnostics while another part was provided for the Hebrew community. In 1856, the Roman Catholics were given ground within the cemetery for their use. 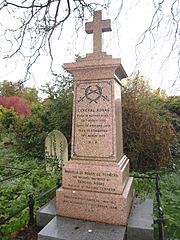 The cemetery has 60 headstones associated with the Titanic although no bodies were returned to Southampton.

The exiled Argentine politician, General Rosas was initially buried in Southampton Old Cemetery until his body was exhumed in 1989 and repatriated to the La Recoleta Cemetery in Argentina. His tomb remains as a memorial. His grandson Manuel Terrero and his wife, the militant suffragette Janie Terrero are buried here.

The headstone of the grave of the aviation pioneer, Squadron Leader Edwin Moon, was made from the propeller of the aircraft in which he was killed in 1920.

Moon is one of 140 identified casualties in the cemetery whose graves are registered and maintained by the Commonwealth War Graves Commission, 125 from World War I and 15 from World War II. A war graves plot contains the graves of 21 Belgian servicemen.

Charles Rawden Maclean (1815–1880), alias "John Ross" friend of King Shaka and an opponent of slavery, died on board a ship bound for Southampton and was buried in a pauper's grave. On 2 May 2009, the grave was marked with a headstone in a ceremony attended by representatives of his home town, Fraserburgh, and of the Zulu nation.

There is also a memorial to the RMS Rhone, wrecked off the coast of Salt Island in the British Virgin Islands on 29 October 1867 during a hurricane with the loss of over 120 lives. The memorial was badly damaged by vandals in October 2011.

The Robert Pearce family grave is marked by a sculpture depicting the figures of Faith, Hope and Charity, surmounted by a draped urn. The memorial was sculpted by Richard Cockle Lucas from Chilworth and is English Heritage Listed, Grade II.

Most of the buildings and some memorials in the cemetery are Grade II listed structures:

The cemetery's ecology is managed by the wildlife team from Southampton City Council in conjunction with Friends of Southampton Old Cemetery, a voluntary group who also take guided tours and assist families to maintain graves.

All content from Kiddle encyclopedia articles (including the article images and facts) can be freely used under Attribution-ShareAlike license, unless stated otherwise. Cite this article:
Southampton Old Cemetery Facts for Kids. Kiddle Encyclopedia.