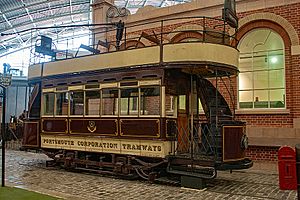 Milestones Museum of Living History is a museum located on the Leisure Park in Basingstoke, Hampshire, UK. Milestones is made up of a network of streets that have been recreated according to those found in Victorian and 1930s Hampshire.

It was opened on 1 December 2000 by Duke of Edinburgh as a joint project between Hampshire County Council and Basingstoke and Deane Borough Council, supported by the Heritage Lottery Fund.

In 2014, ownership of the Milestones Museum was transferred to the Hampshire Cultural Trust as part of a larger transfer of museums from Hampshire County Council and Winchester City Council. 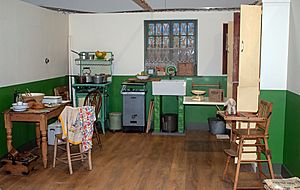 Features include recreations of:

Many of the shops and workshops feature sound tracks of appropriate conversations and sound effects.

There is a large collection of road vehicles, notably by local manufacturers, Thornycroft of Basingstoke and Taskers of Andover. These cover examples of human powered, horse drawn, steam and motor driven vehicles. 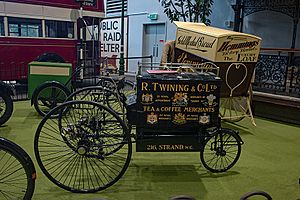 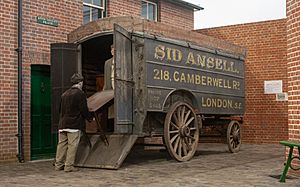 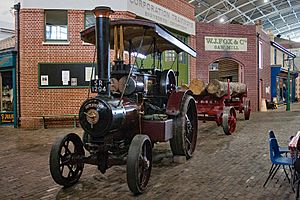 Include two road rollers by Taskers and two by Wallis & Steevens. There are also two Taskers Little Giant traction engines, one displayed with a log trailer.

There are some 25 commercial vehicles along with private cars, two generations of motor buses and a trolleybus. 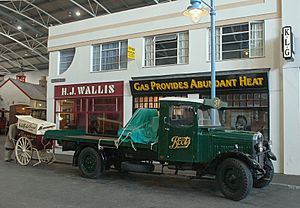 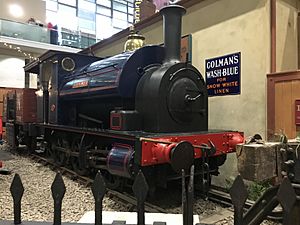 The Museum fire station has a selection of hand-propelled, horse-drawn and motorised fire engines.

Between February and April 2014 the museum hosted an exhibition of Lego models of extinct animals, constructed by Bright Bricks. In 2018, the exhibition returned, focusing on mythical creatures.

A Victorian themed Christmas Market is held in early December.

All content from Kiddle encyclopedia articles (including the article images and facts) can be freely used under Attribution-ShareAlike license, unless stated otherwise. Cite this article:
Milestones Museum Facts for Kids. Kiddle Encyclopedia.