Andover War Memorial Hospital is a community hospital in Andover, Hampshire. The hospital provides inpatient rehabilitation, day hospital services, a minor injury unit and an outpatient unit. It is operated by Hampshire Hospitals NHS Foundation Trust, but some services are provided by Southern Health NHS Foundation Trust. The Countess of Brecknock Hospice is located on the same site as the hospital. The independent regulator of health and social care in England, the Care Quality Commission, rated Andover as "requires improvement" overall in 2018.

The hospital has its origins in a small cottage hospital erected in Junction Road in 1876. It was decided to build a new hospital in Charlton Road to commemorate the lives of service personnel who died in the First World War: the new facility was officially opened by Field Marshal Viscount Allenby in 1926. It joined the National Health Service in 1948.

In 2010, a new outpatient department was opened at the hospital. The old outpatients department, which was described as "unsightly" and "a danger to the public and a temptation to vandals" by the Trust's then-acting chief executive, Chris Gordon, was demolished in November 2011. 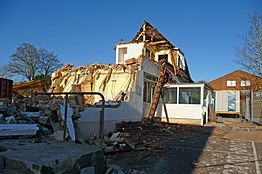 Physiotherapy services are offered both to outpatients and inpatients at the hospital. The outpatients service advise on muscular exercises and provide a range of treatments, including soft tissue massage, acupuncture and electrotherapy.

Kingfisher Ward is a 22-bed ward which specialises in the rehabilitation of elderly people. The ward provides rehabilitation for a variety of patients, including following orthopaedic procedures, post general surgery, for those with cardiac problems or patients recovering from serious infection.

The Maternity Centre, formerly known as the Andover Birth Centre, offers ante-natal and post-natal care. The centre also offers the "DOMINO" scheme, whereby low-risk women are given the option to give birth outside of a hospital environment, under the care of the community midwifery team.

The Minor Injuries Unit is a nurse-led service that provides treatment for minor injuries, aiming to keep patients from using other accident and emergency departments. The unit deals with a number of conditions, including musculoskeletal injuries, wounds, burns and scalds, minor head injuries, minor eye injuries, insect bites and emergency contraception. It also has an X-ray scanner.

The hospital is also the base for SHFT's Community Care Team.

All content from Kiddle encyclopedia articles (including the article images and facts) can be freely used under Attribution-ShareAlike license, unless stated otherwise. Cite this article:
Andover War Memorial Hospital Facts for Kids. Kiddle Encyclopedia.