Oswego County is a county in the U.S. state of New York. As of the 2020 census, the population was 117,525. The county seat is Oswego. The county name is from a Mohawk language word meaning "the pouring out place", referring to the point at which the Oswego River feeds into Lake Ontario at the northern edge of the county in the city of Oswego.

When counties were established in the British colony of New York in 1683, the present Oswego County was part of Albany County. This was an enormous county, including the northern part of what is now New York state as well as all of the present state of Vermont and, in theory, extending westward to the Pacific Ocean. This county was reduced in size on July 3, 1766 by the creation of Cumberland County in the British colony, and further on March 16, 1770 by the creation of Gloucester County, both containing territory now in Vermont.

In the years prior to 1776, most of the Loyalists in Tryon County fled to Canada. In 1784, following the peace treaty that ended the American Revolutionary War, the name of Tryon County was changed to Montgomery County to honor the general, Richard Montgomery, who had captured several places in Canada and died attempting to capture the city of Quebec, replacing the name of the hated British governor.

Oswego County was partly in Macomb's Purchase of 1791.

In 1791, Herkimer County was one of three counties split off from Montgomery (the other two being Otsego, and Tioga County). This was much larger than the present county, however, and was reduced by a number of subsequent splits.

In 1794, Onondaga County was created from a part of Herkimer County. This county was larger than the current Onondaga County, including the present Cayuga, Cortland, and part of Oswego counties.

In 1798, Oneida County was created from a part of Herkimer County. This county was larger than the current Oneida County, including the present Jefferson, Lewis, and part of Oswego counties.

In 1805, Oneida County was reduced in size by the splitting off of Jefferson and Lewis counties.

In 1816, Oswego County was created as New York State's 48th county from parts of Oneida and Onondaga counties.

In 1841, businessmen in Oswego attempted to divide Oswego County into two counties. They failed to persuade the State to do so, however. Occasionally, the topic still comes up today by dividing the county into an east part and a west part, with the east portion being renamed "Salmon County".

At various times, beginning in 1847 and as late as 1975, attempts were made to move the county seat to the Village of Mexico. However, none of these attempts succeeded.

During 1–12 February 2007, a major lake effect snowfall dumped over ten feet of snow in many places in Oswego County, resulting in several roof collapses, some communities being cut off, and some people being snowed-in in their homes. A state of emergency was declared for the county, and the National Guard was sent in to help clear the snow.

On April 20, 2002, around 6:50 am, many residents of Oswego County were shaken awake by a magnitude 5.2 earthquake centered near Plattsburgh, New York. Minor damage to a Fire Hall in Altmar was the only report of damage. No injuries were sustained.

Oswego County is in northwestern New York State, just north of Syracuse and northwest of Utica, on the eastern shore of Lake Ontario. Part of the Tug Hill Plateau is in the eastern part of the county and, at 1,550 feet (470 m), is the highest point. The Salmon River Falls, a 110-foot (34 m) waterfall, is a popular sightseeing destination in the northeastern portion of the county.

There are two harbors in the county, Oswego Harbor at the mouth of the Oswego River and Port Ontario on the Salmon River. The first major port of call on the Great Lakes is the Port of Oswego Authority dock.

Oswego County is also home to two colleges: State University of New York at Oswego in the Town of Oswego and the Fulton Branch Campus of Cayuga County Community College in the City of Fulton. 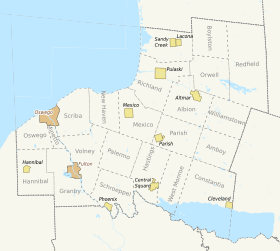 A map of towns, cities and villages located in Oswego County, New York

Swimming places in the county include

Oswego's economy is most prominent as industry; in 2012, manufactured shipments made up $2.1 billion of the local economy. Retail made up the next most prominent sector, totaling $1.2 billion or more than $10,000 per resident. Wholesale merchants also made $368 million sales the same year. Services made up the final total, equal to over $500 million in food service, healthcare, accommodation, and social services.

All content from Kiddle encyclopedia articles (including the article images and facts) can be freely used under Attribution-ShareAlike license, unless stated otherwise. Cite this article:
Oswego County, New York Facts for Kids. Kiddle Encyclopedia.