Pulaski is a village in Oswego County, New York, United States. The population was 2,365 at the 2010 census.

The Village of Pulaski is within the Town of Richland, and lies between the eastern shore of Lake Ontario and the Tug Hill region. The village is located on U.S. Route 11 and is adjacent to Interstate 81. Pulaski was incorporated on April 26, 1832. Although the village takes its name after General Casimir Pulaski ( pə-LAS-kee), area residents have traditionally pronounced it with a long "i" ( pə-LAS-sky). The historic core of the village was listed on the National Register of Historic Places in 1983 as the Pulaski Village Historic District.

Pulaski lies in the Snowbelt which is characterized by heavy amounts of lake effect snow. It has a regional reputation for its heavy snow accumulations and adverse traveling conditions in winter, and for the long duration of winter conditions, often from mid-November through mid-April.

Pulaski history shows that during the early years before incorporation on April 26, 1832 the village was known by various other names. It was once called “Fishville” and sometimes it was called “Salmon River”. It was also stated that the name “Pulaski” was often spelled “Polaski”. It was also used for years with the spelling of Polaski from The Palladium Times to official state documents.

Mary Parker, the local historian, offered two possible theories regarding the selection of the town's name in an article titled "Name Selection is a Mystery." According to Parker, the most credible theory is that in 1829, three years before the town's incorporation, the prominent lawyer and abolitionist Thomas C. Baker proposed the name at a meeting. Another story indicates that the name was chosen when Revolutionary War heroes put names in a hat and pulled the name of Casimir Pulaski. As Mary Parker says, one or both may not be true but local historians are researching how the name was picked.

In October 1816 the first court of Oswego County was held in Oswego, when a number of people presented themselves and were admitted to the bar, thus being the only business transacted. However, in February 1817 the first jury was selected for court was convened in Pulaski. It was only three years after the first court was held in Oswego County was there a court house erected in Pulaski. 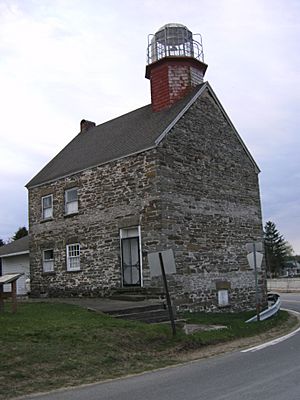 A few miles to the west from the village of Pulaski at the mouth of the Salmon River harbored a lighthouse. In the 1830s the government engineers determined that the mouth had sufficient depth that it could harbor thirty ships. So in August 1838 the lighthouse was inaugurated. The lamp originally ran on whale oil. Due to the lack of importance of the harbor it was deactivated in 1858. In 1989 a Coast Guard Class II navigation aid was installed and was reactivated. It was placed on the National Register of Historic Places in March 1979.

“In 1853 the citizens of the village became interested in the education of their children and youth. An act of legislature was passed to consolidate parts of three school districts within the village into one”. There on after it was the “Pulaski school district”. This enabled the school to go by the name “Pulaski Academy”. The Pulaski Academy and Central School currently occupies two buildings: Lura Sharp Elementary School (built in 1939 and originally housed grades K-12 until 1969) and the Pulaski Middle-Senior High School (built in 1969, originally housing grades 7-12 as Pulaski Jr.-Sr. High School, grade 6 was moved into the facility in 2009). Other elementary school buildings in the hamlets of Richland and Fernwood were closed in the late 1960s or early 1970s.

In the early hours of October 6, 1881 in a bakery in the back of M.L. Hollis store a fire started. In just over three hours the whole business portion of Pulaski was destroyed by the fire. Reason it took so little time to burn was because of the buildings built of wood and the fire stations facilities were inadequate to hold the fire in check.

From the 1840s to the present there have been many factories located in and around the village. With the village lying on the banks of the Salmon River it was a major asset in its development. “There have been at least hundred and twenty factories” come and go. From wood mills to iron works, there have been many different factories located in Pulaski. All that remain now are the remnants of years past. Only a couple bigger companies now remain. Fulton Companies, Healthway, and Schoeller Technical Paper are the only remaining bigger companies in Pulaski.

The Pulaski Village Historic District and Selkirk Lighthouse are listed on the National Register of Historic Places.

There were 1,034 households out of which 29.5% had children under the age of 18 living with them, 40.1% were married couples living together, 12.3% had a female householder with no husband present, and 43.4% were non-families. 37.1% of all households were made up of individuals and 20.4% had someone living alone who was 65 years of age or older. The average household size was 2.30 and the average family size was 3.05. 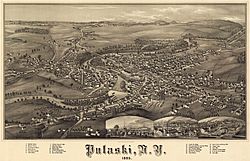 Nearby Interstate 81 allows local residents access to the nearby cities of Syracuse and Watertown. This proximity promotes the Pulaski area as a primary access point for the Lake Ontario and Tug Hill recreational tourism. Pulaski is served by Trailways Bus Lines as well as three Oswego County Public Transit Lines.

All content from Kiddle encyclopedia articles (including the article images and facts) can be freely used under Attribution-ShareAlike license, unless stated otherwise. Cite this article:
Pulaski, New York Facts for Kids. Kiddle Encyclopedia.