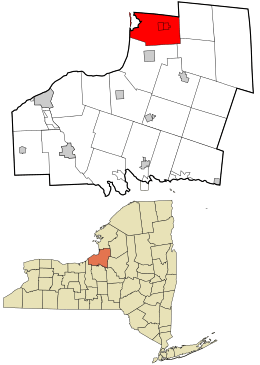 Sandy Creek is a town in Oswego County, New York, United States. The population was 3,939 at the 2010 census. The name is derived from a creek in the area.

Champlain passed through the town in 1615, leading a war party of Hurons and soldiers.

The town was first settled around 1803, near Lacona. Sandy Creek was formed from the Town of Richland in 1825.

In 1835, Sandy Creek resident Thomas Meacham decided to make the world's largest cheese as a gift to president Andrew Jackson. His finished product was 4 feet in diameter, 2 feet thick, and weighed nearly 1400 pounds. The cheese was delivered and sat in the White House until February 22, 1836 when the president invited the public to come to the White House and eat the cheese. This event was made famous in an episode of the television show The West Wing.

The Holyoke Cottage was listed on the National Register of Historic Places in 1988.

The west border of Sandy Creek is Lake Ontario and the north border is Jefferson County.

There were 1,543 households out of which 31.0% had children under the age of 18 living with them, 54.1% were married couples living together, 9.4% had a female householder with no husband present, and 31.0% were non-families. 25.0% of all households were made up of individuals and 10.2% had someone living alone who was 65 years of age or older. The average household size was 2.50 and the average family size was 2.97.

All content from Kiddle encyclopedia articles (including the article images and facts) can be freely used under Attribution-ShareAlike license, unless stated otherwise. Cite this article:
Sandy Creek, New York Facts for Kids. Kiddle Encyclopedia.