Brewerton is a census-designated place (CDP) in the town of Cicero in Onondaga County and the town of Hastings in Oswego County in the U.S. state of New York. It lies at the west end of Oneida Lake at its outlet into the Oneida River. The population was 4,029 at the 2010 census. 19th century maps indicate that this area was once known as Fort Brewerton, while Brewerton meant the Cicero portion. 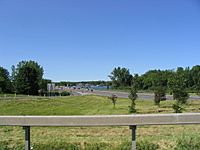 The community is sited near the former Fort Brewerton, erected in 1759 to defend the passage from Albany to the port of Oswego. Settlers arrived in 1789 to engage in the fur trade. The Fort Brewerton Block House Museum contains local relics dating back to Paleo-Indian times. It is located next to the original fort.

In the late 18th century two Presbyterians, Rev. John Shepard and Deacon George Ramsey started preaching in the area near the Fort Brewerton embankment. Deacon Ramsey built a schoolhouse nearby which was used for both instruction and worship.

In 1948 the Brewerton Speedway was built by Alvin Richardson of Buffalo as a 1/4 mile dirt track.Brewerton is currently working on another track

Fort Brewerton was listed on the National Register of Historic Places in 1973.

Brewerton has the largest elementary school in the Central Square School District, which is the geographically one of the largest school districts in the State of New York. 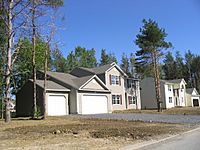 Champlain at the Lake housing development in Brewerton

Both U.S. Route 11 and Interstate 81 pass through the hamlet, connecting it to Watertown to the north and Syracuse to the south. In April 2007, the Town of Cicero redrew the traditional boundaries of Brewerton, moving the eastern line west to Interstate 81, and the southern line northward from Mudmill Road to Orangeport Road. This was done to allow Brewerton to remain eligible for Federal grant money. New housing developments had made Brewerton exceed guidelines for "blighted" areas that allow for improvement funds.

In recent years, Brewerton has become a major port for fishing on the already popular Oneida Lake. This is due to the recent Bass Masters outings at Oneida Shores County Park.

Brewerton is now a center in the growth of housing developments Miralago and Champlain at the lake. 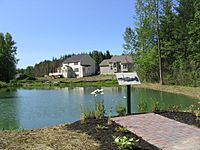 A neighborhood in Brewerton

There were 1,376 households out of which 40.6% had children under the age of 18 living with them, 49.4% were married couples living together, 15.0% had a female householder with no husband present, and 30.1% were non-families. 23.8% of all households were made up of individuals and 8.8% had someone living alone who was 65 years of age or older. The average household size was 2.51 and the average family size was 2.96.

All content from Kiddle encyclopedia articles (including the article images and facts) can be freely used under Attribution-ShareAlike license, unless stated otherwise. Cite this article:
Brewerton, New York Facts for Kids. Kiddle Encyclopedia.