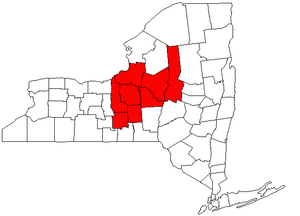 Central New York is a term used to broadly describe the central region of New York State, roughly including the following counties and cities:

Under this definition, the region has a population of about 1,177,073, and includes the Syracuse metropolitan area. The total area of the above counties is 8,639 square miles (22,370 km2), which is slightly smaller than New Hampshire.

The Central New York Military Tract (land reserved from soldiers of the American Revolution) was located here. Many towns derived from the tracts have classical names.

Many Central New Yorkers pronounce elementary as /ɛləˈmɛntɛri/ instead of the General American pronunciations of /ɛləˈmɛntəri/ and /ɛləˈmɛntri/. The r-colored vowels in documentary and complimentary follow suit.

All content from Kiddle encyclopedia articles (including the article images and facts) can be freely used under Attribution-ShareAlike license, unless stated otherwise. Cite this article:
Central New York Facts for Kids. Kiddle Encyclopedia.