Madison County is a county located in the U.S. state of New York. As of the 2020 census, the population was 68,016. Its county seat is Wampsville. The county is named after James Madison, the fourth president of the United States, and was first formed in 1806.

Madison County is part of the Syracuse metropolitan area.

Indigenous peoples had occupied areas around Oneida Lake for thousands of years. The historic Oneida Nation is an Iroquoian-speaking people who emerged as a culture in this area about the fourteenth century and dominated the territory. They are one of the Five Nations who originally comprised the Iroquois Confederacy or Haudenosaunee.

English colonists established counties in eastern present-day New York State in 1683; at the time, the territory of the present Madison County was considered part of Albany County, with the city of Albany located on the Hudson River. This was an enormous county, including the northern part of New York State around Albany as well as all of the present State of Vermont and, in theory, extending westward to the Pacific Ocean. It was claimed by the English but largely occupied by the Oneida, Onondaga, Seneca, Cayuga and Mohawk, who had the territory in the central Mohawk Valley, as well as Mahican near the Hudson River. On July 3, 1766 the English organized Cumberland County, and on March 16, 1770 they organized Gloucester County, both containing territory now included in the state of Vermont. 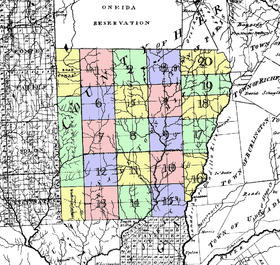 The "Twenty Townships" west of the Unadilla River, conveyed by the Oneida Indians in 1788. Known as "Clinton's Purchase"

On March 12, 1772, what was left of Albany County was split into three parts, one remaining under the name Albany County. One of the other pieces, Tryon County, contained the western portion (and thus, since no western boundary was specified, theoretically still extended west to the Pacific). The eastern boundary of Tryon County was approximately five miles west of the present city of Schenectady, and the county included the western part of the Adirondack Mountains and the area west of the West Branch of the Delaware River. The area then designated as Tryon County includes 37 current counties of New York State. The county was named for William Tryon, the colonial governor of New York.

In the years prior to the outbreak of revolution in 1776, tensions rose in the frontier areas upstate and most of the Loyalists in Tryon County fled to Canada. In 1784, following the peace treaty that ended the American Revolutionary War, New York changed the name of Tryon County to Montgomery County, in honor of the general, Richard Montgomery, who had captured several places in Canada and died attempting to capture the city of Quebec.

As allies of the Patriots, the Oneida Nation was allocated land by the United States in the postwar settlement for a reservation near Oneida Lake, in their traditional homeland. In the postwar treaty, the four Iroquois nations who had been allies of the British were forced to cede their lands; most of their peoples had already migrated to Canada to escape the worst of the fighting on the frontier after Sullivan's Raid. This expedition through Indian country had destroyed dwellings, crops and winter stores; many Iroquois who did not migrate died of starvation that winter.

But settlers were hungry for land, and in 1788 Governor Clinton's representatives persuaded the Oneida to cede some of their territory to the state for sale to European-American settlers. This was called the "Clinton Purchase", after Governor George Clinton. The land comprised the southern portion of the Oneida reservation. It has also been called the Twenty Townships, as these were the number organized after New York controlled the land.

In 1789, Montgomery County was reduced in size by the splitting off of Ontario County. This was later divided to form the present Allegany, Cattaraugus, Chautauqua, Erie, Genesee, Livingston, Monroe, Niagara, Orleans, Steuben, Wyoming, Yates, and part of Schuyler and Wayne counties.

In 1791, Herkimer and Tioga counties were two of three counties split off from Montgomery County (the other being Otsego County).

About 1802, the Oneida agreed to allocate about 22,000 acres of their land to the Stockbridge and Munsee (Lenape), who were seeking refuge from anti-Native American conflicts by American settlers after the Revolution. Both were Christianized: the Stockbridge had migrated from western Massachusetts and the Lenape from New York and New Jersey. The two peoples were pressured to leave New York for Wisconsin in the 1820s, to make more land available for European-American settlement.

In the late twentieth century, the three recognized Oneida tribes: of Wisconsin, New York, and the Thames reserve in Canada, filed suit in a land claim against New York State for its treaty and forced purchase of their ancestral lands after the American Revolutionary War, seeking return of thousands of acres. The US Supreme Court has ruled the purchase was unconstitutional, as New York did not have the treaty ratified by the US Senate, and had no authority under the US Constitution to deal directly with the Oneida, a right reserved to the federal government. In 2010 the state offered the Oneida Tribe of Wisconsin more than 300 acres in Sullivan County in the Catskill Mountains, with permission to construct a gambling casino, and 2 acres in Madison County, to settle their part of the suit. Several private and public interests oppose the deal, including other federally recognized tribes in New York.

Madison County is located in central New York State, just east of Syracuse, north of Binghamton, and slightly north of due west from Albany. Madison County contains the geographic center of the state at Pratts Hollow in the Town of Eaton.

Oneida Lake and Oneida Creek define part of the northern boundary. The Great Swamp, formerly located south of the lake, was a rich wetlands habitat important to many species of birds and wildlife. This was drained by local and state construction projects in the early decades of the twentieth century, chiefly by Italian immigrants. The fertile soil supported high production of onions and other commodity crops, and the Italian families grew wealthy from their work. The area was known as "Black Beach" for its mucklands. Chittenango Creek defines much of the western boundary.

Much of Madison County is rural. However, the communities along NY Route 5 are suburbs of Syracuse, as is Cazenovia.

The towns in southern Madison County originated from the Twenty Townships ceded by the Oneida tribe to the State of New York.

All content from Kiddle encyclopedia articles (including the article images and facts) can be freely used under Attribution-ShareAlike license, unless stated otherwise. Cite this article:
Madison County, New York Facts for Kids. Kiddle Encyclopedia.