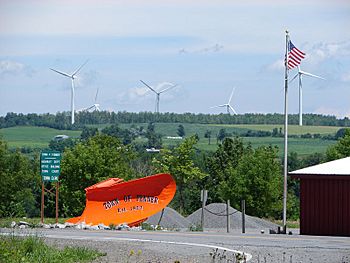 The Fenner wind turbines, erected in 2001, are the first of their kind to be installed in Central New York.

Fenner is a town in Madison County, New York, United States. The population was 1,726 at the 2010 census.

The Town of Fenner is in the north-central part of the county. The town is east of Cazenovia Lake.

The area was settled around 1795. The town was formed in 1823. Fenner was named for Governor Fenner, of Rhode Island.

The Fenner Baptist Church was listed on the National Register of Historic Places in 2002.

There were 607 households, out of which 38.7% had children under the age of 18 living with them, 60.0% were married couples living together, 9.9% had a female householder with no husband present, and 25.0% were non-families. 18.0% of all households were made up of individuals, and 4.9% had someone living alone who was 65 years of age or older. The average household size was 2.77 and the average family size was 3.14.

Communities and locations in Fenner

Fenner is the location of a windmill power generating station, home to 20 wind turbines which create enough energy to power more than 10,000 homes annually.

All content from Kiddle encyclopedia articles (including the article images and facts) can be freely used under Attribution-ShareAlike license, unless stated otherwise. Cite this article:
Fenner, New York Facts for Kids. Kiddle Encyclopedia.