The lake resides in a valley created by sub-glacial runoff during the recession of North American continental glaciers at the end of the last glacial period.

Prior to European settlement of the area, Cazenovia Lake was known to the Oneida as Owagehaga or Owahgenah, and to the Onondaga as Hohwahgeneh, all of which mean "lake of the yellow perch". It was also previously known as "Canaseraga Lake". 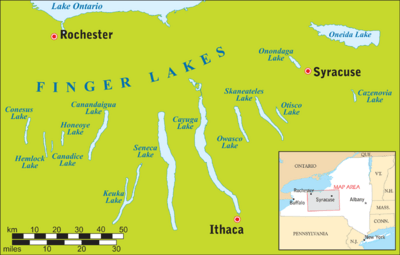 Cazenovia Lake is roughly 3.9 miles (6.3 km) long and one-half mile (0.80 km) wide. It is 45 feet (14 m) at its deepest point. The lake's elevation is at 1,191 feet (363 m) above sea level. It is drained from its southeast corner by Chittenango Creek, which then flows north over Chittenango Falls and eventually into Oneida Lake's south shore in Bridgeport.

Boating access for trailered boats is allowed by permit at Lakeside Park in the village of Cazenovia. An unofficial launch for canoes and kayaks is available at the undeveloped Helen L. McNitt State Park on the northeastern shore of the lake. Plans to improve the launch were announced in 2015.

All content from Kiddle encyclopedia articles (including the article images and facts) can be freely used under Attribution-ShareAlike license, unless stated otherwise. Cite this article:
Cazenovia Lake Facts for Kids. Kiddle Encyclopedia.