Cazenovia is a village located in the Town of Cazenovia in Madison County, New York, United States. As of the 2010 census, the village had a population of 2,835. The village lies on the southeastern shore of Cazenovia Lake, which is approximately 4 miles (6.4 km) long and .5 mile across. The village is located on US Route 20 and New York State Route 13, and is home to Cazenovia College. 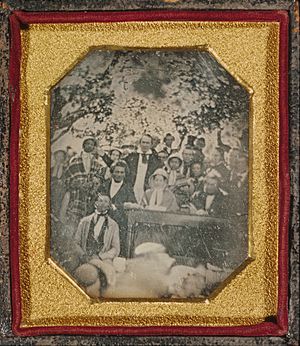 Daguerreotype made by Ezra Greenleaf Weld at the 1850 Fugitive Slave Law Convention in Grace Wilson's apple orchard on Sullivan Street.

Cazenovia was established in 1794 by John Lincklaen, a young Dutch naval officer who purchased the town under the auspices of the Holland Land Company. Some of the first buildings established in Cazenovia were what is now the Presbyterian Church and the company store. The town is named after Theophilus Cazenove, an agent with the land company.

The village was incorporated in 1810 and was the first county seat (until 1817). Many of the village's historic buildings are encompassed by the Albany Street Historic District and Cazenovia Village Historic District. Also listed on the National Register of Historic Places is the Lehigh Valley Railroad Depot.

In 1850 Cazenovia was the site of the famous Fugitive Slave Law Convention organized by abolitionist Gerrit Smith and chaired by former slave Frederick Douglass to protest the proposed Fugitive Slave Act.

The Lorenzo State Historic Site was listed in the National Register of Historic Places in July 1970. This land, located off Route 13 (Rippleton Road), now belongs to the NY Historic Start Trust after being bought from the previous owner, George Ledyard, upon his death. There is a school house, mansion, farmhouse, and a landscaped garden that guests can tour throughout the year by appointment or during regular hours.

In 2005, the Cazenovia High School Academic Decathlon team won the school's first state title, sending the team to the national competition in Chicago. The team retained its state title the following four years, traveling to national competitions in San Antonio, Texas in 2006, Honolulu, Hawaii in 2007, Anaheim, California in 2008, and Memphis, Tennessee in 2009.

There were 943 households, out of which 25.6% had children under the age of 18 living with them, 43.5% were married couples living together, 9.5% had a female householder with no husband present, and 44.6% were non-families. 38.8% of all households were made up of individuals, and 20.7% had someone living alone who was 65 years of age or older. The average household size was 2.17 and the average family size was 2.93.

The Cazenovia Public Library is a public library located in the town of Cazenovia (village), New York, United States. As a library in Madison County it is a part of the Mid-York Library System. It is located at 100 Albany Street, Cazenovia, NY. In its original building it houses specimens and historical artifacts that have been generously donated to the library.

A side view of the Library building)

The first incidence of a library in Cazenovia was started in 1828 by John Williams, a general store owner and merchant. His library “consisting of 200 vols.” were lent to the public for free. It was not until 1886 that the Cazenovia Library Society was formed. Societies like it maintained their libraries “through membership, lending fees, and gifts”

In 1890, Robert J. Hubbard purchased and donated a house for the library's use. Built in the Greek Revival style, it had been built in 1830 for John Williams. The ground floor of the house served as the main library building until a modern extension was built in 1996. Robert J. Hubbard also donated his collection of souvenirs from his 1894 Grand Tour trip. One of the most notable artifacts he brought back was an ancient Egyptian mummy.

Since 1985 the Cazenovia Public Library has served as a home to four library cats.

All content from Kiddle encyclopedia articles (including the article images and facts) can be freely used under Attribution-ShareAlike license, unless stated otherwise. Cite this article:
Cazenovia (village), New York Facts for Kids. Kiddle Encyclopedia.