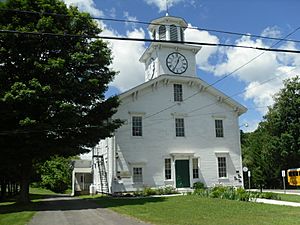 Peterboro, located approximately 25 miles (40 km) southeast of Syracuse, New York, is a historic hamlet and currently the administrative center for the Town of Smithfield, Madison County, New York, United States. The Town Hall, in a former Presbyterian church, houses the National Abolition Hall of Fame and Museum. Another historic building is the Peterboro Land Office of Peterboro's most famous resident ever, Gerrit Smith. Peterboro has a Post Office, ZIP code 13134.

In 1795, Peter Smith, Sr., a partner of John Jacob Astor's who built his fortune in the fur trade, founded Peterborough, naming the town after himself. Smith moved his family to Peterborough in 1804 and built the family home there. In 1894 the town name was changed to Peterboro, which is the form it retains to this day.

In 2001, the Gerrit Smith Estate was designated a National Historic Landmark. The Peterboro Land Office building and Smithfield Presbyterian Church are listed on the National Register of Historic Places.

In the 1820s, Gerrit Smith took over the business interests of his father, Peter Smith Sr., managing his family's property holdings in the town and the surrounding area. The Peterboro Land Office—the surviving building of the Smith estate—was built as his office for these activities.

Gerrit Smith's commitment to both the abolition and temperance movements led to the Smith estate in Peterboro becoming a stop on the underground railroad. Less successful was Smith's temperance campaign, which did not enjoy local support; he built one of the first temperance hotels in the country in Peterboro, which commercially was not successful. The Smith estate also served as an important meeting place for abolitionists from both New York and other parts of the country, including John Brown and Frederick Douglass.

All content from Kiddle encyclopedia articles (including the article images and facts) can be freely used under Attribution-ShareAlike license, unless stated otherwise. Cite this article:
Peterboro, New York Facts for Kids. Kiddle Encyclopedia.