Eaton is a town in Madison County, New York, United States. The population was 5,255 at the 2010 census.

The Town of Eaton is in the south-central part of the county. US Route 20 passes across the northern part of the town.

The town was the principal location of the Oneida tribe, a sub-group of the Iroquois that allied itself with the colonial forces during the American Revolution. Euro-American settlement began around 1792. The Town of Eaton was formed in 1807 from the Town of Hamilton. Eaton is named for William Eaton, a Revolutionary officer and commander of the United States military forces in Tripoli. 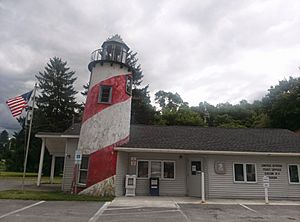 The whimsical design of the Eaton post office mimics a lighthouse, a relic of the building's earlier life as a Tower gas station. 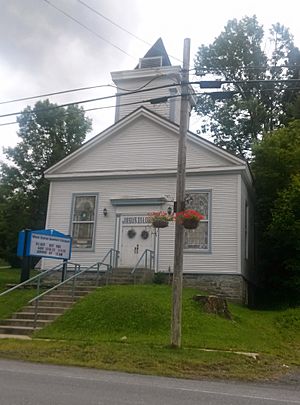 Eaton is centered at 42.850 degrees north latitude, 75.612 degrees west longitude. The town contains the geographic center of the state (near Pratts Hollow). The Chenango River flows through the town.

Communities and other locations in Eaton

All content from Kiddle encyclopedia articles (including the article images and facts) can be freely used under Attribution-ShareAlike license, unless stated otherwise. Cite this article:
Eaton, New York Facts for Kids. Kiddle Encyclopedia.