Named after the Oneida word for bull thistle, in the 19th century the Chenango furnished a critical link in the canal system of the northeastern United States. The Chenango Canal, built from 1836–1837 between Utica and Binghamton, connected the Erie Canal in the north to the Susquehanna River. The canal was rendered obsolete by railroads and was abandoned in 1878.

Flooding is often a concern during the spring and fall. 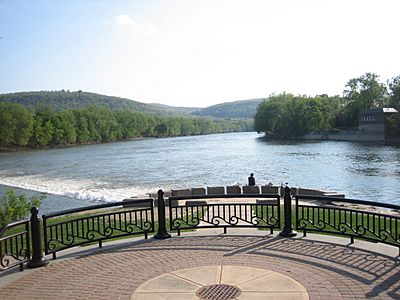 The confluence of the Chenango River (right) and Susquehanna River (left) at Confluence Park in Downtown, Binghamton, NY.

The Chenango River begins near Morrisville in Madison County, in central New York, in the Morrisville Swamp in the Town of Smithfield, about 25 miles southwest of Utica. The river flows from the Campbell Lakes in the swamp, from waters flowing in from the Smithfield Hills to the north and west and a series of cliffs called "The Ledges" to the north and east. It flows south-southeast through the swamp. From Morrisville, it flows south past Eaton and is paralleled by the remnants of the old Chenango Canal from Randallsville, just south of Hamilton, to just north of Earlville where the old canal joined the river. Continuing south the Chenango is joined by the Sangerfield River, also known as the East Branch of the Chenango, just south of Earlville. Then it flows south past Sherburne to Norwich, where it turns southwest. At Oxford it turns south, and at Warn Lake it again turns southwest. It flows past Brisben and Greene to Chenango Forks, where, about nine miles north of Binghamton, it receives from the right its major tributary, the Tioughnioga River. It ends where it joins the Susquehanna from the north in downtown Binghamton in Broome County. Its overall length is about 90 miles.

All content from Kiddle encyclopedia articles (including the article images and facts) can be freely used under Attribution-ShareAlike license, unless stated otherwise. Cite this article:
Chenango River Facts for Kids. Kiddle Encyclopedia.