Kids Encyclopedia Facts
This page is about the city. For the surrounding town, see Norwich (town), New York.

Norwich is a city in Chenango County, New York, United States. Surrounded on all sides by the town of Norwich, the city is the county seat of Chenango County. The name is taken from Norwich, England. Its population was 7,190 at the 2010 census.

Lt. Warren Eaton Airport (OIC), serving the area, is located north of the city in the town of North Norwich. 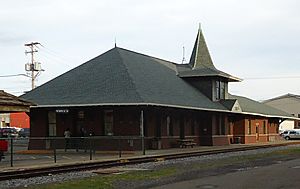 During the 1850s through the mid twentieth-century, many travelers arrived by train. 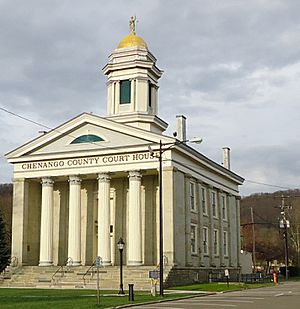 The first settlers arrived around 1788. The town of Norwich was formed in 1793 from the towns of Union (now in Broome County) and Bainbridge. Afterwards, Norwich, as a "mother town" of the county, lost substantial territory in the formation of new towns. In 1806, Norwich gave up territory to form the towns of Pharsalia, Plymouth and Preston. More of Norwich was lost in 1807 to form parts of the towns of New Berlin and Columbus. In 1808 and 1820, Norwich exchanged territory with the town of Preston.

The central community of Norwich set itself off from the town in 1816 by incorporating as a village, later becoming the city of Norwich in 1914.

According to the United States Census Bureau, the city has a total area of 2.1 square miles (5.5 km2), all of it land. Unlike many upstate cities, there are few, if any, defined neighborhoods or districts. Although the city is divided into six wards for political purposes, neighborhoods are seldom referred to in this manner.

Downtown is the main commercial district of Norwich, consisting of North and South Broad streets, East and West Main streets, and lesser side streets, including American Avenue, Lackawanna Avenue, and parts of Mechanic, Fair, and Hayes streets. The downtown district is bordered on the north by Cortland and Mitchell streets, and to the south by Front Street and Eaton Avenue.

Norwich is located in upstate New York, in the Chenango River valley. The river, a tributary of the Susquehanna, winds south along the eastern edge of the city. Along the western border, Canasawacta Creek flows south, until it unites with the Chenango River at the southern city limits. 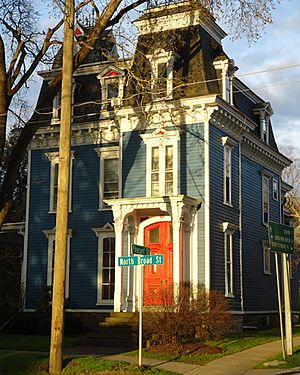 A house along a main street

There were 3,131 households out of which 28.6% had children under the age of 18 living with them, 35.6% were married couples living together, 13.4% had a female householder with no husband present, and 46.6% were non-families. 40.2% of all households were made up of individuals and 19.0% had someone living alone who was 65 years of age or older. The average household size was 2.19 and the average family size was 2.95.

Numerous festivals and events mark the Norwich calendar, with residents looking forward to several annual cultural traditions. Most notable is the Colorscape Chenango Arts Festival, a two-day event in early September that features regional musicians and artists. The festival drew an estimated 15,000 people in 2005. Since 1993, the Chenango Blues Festival, held at the Chenango County Fairgrounds each August, has attracted thousands and featured nationally renowned artists such as Koko Taylor, Luther Allison, and The Fabulous Thunderbirds. Since the early 1990s, the nationally known Gus Macker organization has hosted a 3-on-3 basketball tournament in early July, with hundreds of teams participating each year. Norwich, is also home to Phoenix Project Dance, an internationally touring modern dance company. Phoenix Project Dance has called Norwich home since 2004.

Museums include the Chenango County Historical Society and the Northeast Classic Car Museum, which houses over 150 classic cars, including the world's largest collection of Franklin cars, which were luxury items.

All content from Kiddle encyclopedia articles (including the article images and facts) can be freely used under Attribution-ShareAlike license, unless stated otherwise. Cite this article:
Norwich, New York Facts for Kids. Kiddle Encyclopedia.