Oneonta ( OH-nee-ON-tə) is a city in southern Otsego County, New York, United States. It is one of the northernmost cities of the Appalachian Region. According to the 2010 U.S. Census, Oneonta had a population of 13,901. Its nickname is "City of the Hills." While the word "oneonta" is of undetermined origin, it is popularly believed to mean "place of open rocks" in the Mohawk language. This refers to a prominent geological formation known as "Table Rock" at the western end of the city.

The city is surrounded by the town of Oneonta, a separate municipal and political jurisdiction. Oneonta Municipal Airport (N66) is north of the city. 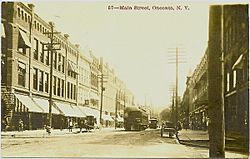 Indigenous ancestors of Algonquin and Iroquoian-speaking Native Americans inhabited the land in the territory of Oneonta for thousands of years before European colonists pillaged the area. The Five Nations of the Iroquois Confederacy are believed to have emerged and gained dominance prior to the 15th century; they were in place at the time of early French and Dutch colonization.

The area's early European-American settlers did not arrive until around 1775 and consisted mainly of ethnic Palatine German and Dutch settlers moving out of the Hudson and eastern Mohawk valleys. The first such settler in the area now known as the Town of Oneonta was Henry Scramling (b. ~1743; d. 1808). He had secured a grant of 1,000 acres in the Susquehanna Valley, moved from German Flatts and settled about 1773 in the Oneonta Plains near the mouth of the Otego Creek. He left during the Revolution and returned after the conflict with his brothers, George and David Scramling, and his brothers-in-law, John and David Young. Their farms were not far from the mouth of the Otego Creek. The army led by General James Clinton passed through the area in order to join the Sullivan Expedition in 1779 against Iroquois settlements.

The first hamlet developed around 1800 and was later known as "Milfordville." In 1830, the Town of Oneonta was formed from parts of two other Towns in the county. Milfordville changed its name to Oneonta in 1832. In 1848, it was incorporated as a village within the Town.

In the mid-19th century, the Delaware and Hudson Railroad reached Oneonta, stimulating development as a railroad center and attracting new industries. Oneonta was once home to the largest locomotive roundhouse in the world.

The village incorporated as a city in 1908.

The city is in the northern foothills of the Catskill Mountains, lying between Binghamton and Albany.

The Susquehanna River flows westward past the south part of the city.

The architecture of Oneonta consists of a variety of Victorian and 20th-century commercial and domestic styles, including low-rise commercial buildings. Oneonta currently has very few industrial complexes. Because of its location, Oneonta does not serve as a prime industrial city.

There are several historic buildings that were originally homes of prominent people. The Fairchild Mansion was placed on the National Register of Historic Places in 1974 and was formerly the home of George Winthrop Fairchild, one of the original partners with Thomas Watson. Fairchild and Watson were the founders of what eventually became IBM. Also, George I. Wilber House is a historic home located in the City. It was built in two phases, 1875 and about 1890. It is a three story wood frame structure on a stone foundation in the Late Victorian style. It features a three story, round corner tower, cross gabled roof, and a large, very decorative wrap-around porch with a porte-cochere. In 1997 it became home to the Upper Catskill Community Council of the Arts (now the Community Arts Network of Oneonta). It was listed on the National Register of Historic Places in 2000.

The tallest building in Oneonta is Nader Towers. Standing 9-stories high, the building is owned by the City of Oneonta Housing Authority and is operated as a senior citizen's housing dwelling. 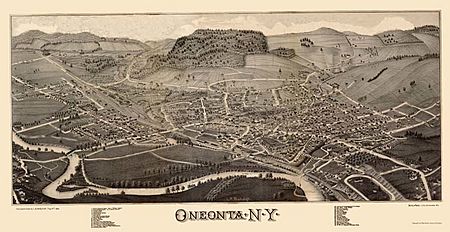 Oneonta, New York, as depicted on an 1884 panoramic map

Damaschke Field, home of the Oneonta Outlaws of the Perfect Game Collegiate Baseball League (PGCBL), is located in Neawha Park.

In 2008 the city of Oneonta celebrated its Centennial with monthly events throughout the year beginning with the New Year's Eve parade.

Oneonta City School District (OCSD) enrolls students from the communities of the City of Oneonta, the Town of Oneonta, the town of Davenport, the town of Laurens, and the town of Milford. OCSD has one high school, Oneonta High School, which has about 650 students; one middle school, Oneonta Middle School, which has about 300 students; and three elementary schools, Greater Plains, Riverside, and Valleyview, which have a total enrollment of about 900.

A fourth elementary school, Center Street School, was closed in June 2012 due to declining enrollment and decreased funding from New York State.

All content from Kiddle encyclopedia articles (including the article images and facts) can be freely used under Attribution-ShareAlike license, unless stated otherwise. Cite this article:
Oneonta, New York Facts for Kids. Kiddle Encyclopedia.