The Village of Hamilton is a village located within the town of Hamilton in Madison County, New York, United States. Notably, it is the location of Colgate University and has a population of 4,239, according to the 2010 census. The 2017 movie Pottersville starring Michael Shannon and Judy Greer was filmed here.

Snowfall is the most notable aspect of the area's climate, which is typical of central Upstate New York in the vicinity of Syracuse. Snowfall produced by lake-effect snow from Lake Erie and Lake Ontario usually extends into the Mohawk Valley and often inland as far as the southern Finger Lakes and the nearby southern tier of counties; with snowfall, at a minimum, in the range of 40 to 50 inches per season. Heavy snow squalls frequently occur, generating from 1 to 2 feet of snow and occasionally 4 feet or more. The village's average seasonal snowfall is approximately 80 inches.

The area that became the town of Hamilton (including the village of Hamilton) originally was inhabited by members of the Iroquois League, and some of the territory is still considered to be sacred by the Oneida Indian Nation. Following the American Revolution, the area was ceded to the State of New York. Until 1878, Hamilton was an original outpost of the Chenango Canal.

The town of Hamilton was founded near what is now Earlville and then it gradually expanded into a wide area populated by farms and settlements.

In 1794, Samuel Payne moved southwest from Whitestone into the town of Hamilton, where he started a farm on the hill that is today’s location of Colgate University.

In 1795, a year after his brother moved into the town of Hamilton, Elisha Payne did so as well. He and others from Whitestone and Connecticut moved to an unsettled area just north of his brother and that settlement grew to become today's village of Hamilton. Because of Elisha Payne's interest and ability in developing the settlement, it became known as "Payne's Settlement". He built a barn, the first framed building in the village, and in 1802 he opened a tavern at the intersection of Broad and Lebanon streets, taking the place of an existing tavern that had opened in 1800. This became the Park House (hotel), which in 1925 was replaced by the present-day Colgate Inn. 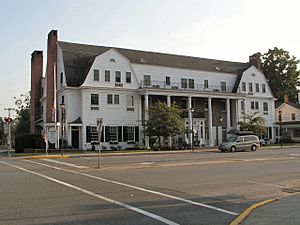 By 1800, Payne’s Settlement had, in addition to log cabins, five framed buildings and a nearby sawmill. By 1806 much of the land surrounding the settlement had been cleared and replaced by orchards and farms. Salt was the accepted form of currency in the settlement.

Payne's Settlement experienced a financial boom from 1800 through the War of 1812 due to extensive crop exports to Europe and to the high prices obtained for provisions in New York during the war. Serving as the trading center, the Settlement naturally prospered when farmers received higher prices. In addition, the 1808 opening of the Skaneateles Turnpike, which connected the village to western New York, probably contributed to the favorable economic climate.

Early commerce in the village included groceries, blacksmiths, book sellers, furniture and carriage makers, feed stores, quarries and lumber mills. The village's first newspaper, the Hamilton Recorder, was started in 1817. The Chenango Canal (1834–1878) passed through the west side of the village alongside what is now the Barge Canal Cafe, providing another connection between the Erie Canal, Midwest grain farms and East Coast markets. Agriculture in the surrounding area initially emphasized hops but later agriculture in the area became predominantly dairy farming.

In 1903, John Vincent Atanasoff, creator of the first digital electronic computer, was born in Hamilton.

Much of the historic core of the village is part of the Hamilton Village Historic District, which became listed on the National Register of Historic Places in 1984. Many of the buildings in today’s village date from 1895, the year of "the great fire" which destroyed much of the village. Many of those buildings were rebuilt in the same year, with "1895" on their facades. 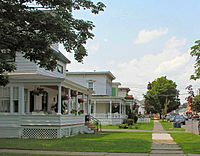 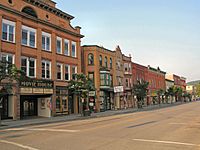 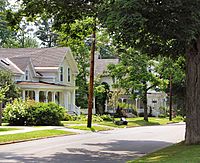 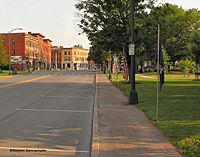 The Village of Hamilton, street scenes. See for a live webcam of downtown Hamilton.

There were 707 households, out of which 21.9% had children under the age of 18 living with them, 37.6% were married couples living together, 6.1% had a female householder with no husband present, and 54.6% were non-families. 41.3% of all households were made up of individuals, and 19.9% had someone living alone who was 65 years of age or older. The average household size was 2.13 and the average family size was 2.92.

Colgate is the largest economic influence in the village: with a population of 3,500, the village's population is just slightly larger than the size of Colgate's student body, and approximately 85 percent of the university’s faculty members live within 10 minutes of campus. 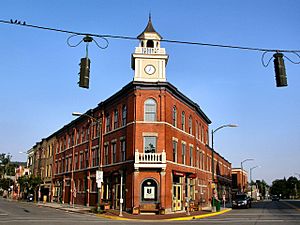 The village, the town of Hamilton, and Colgate have formed the Partnership for Community Development which develops an active network of professional consultants, foundations, municipalities and not-for-profit organizations located throughout the Central New York region to assist area residents, businesses and visitors, including efforts to stimulate and support local business through small business development and the revitalization of historic buildings. To strengthen the relationship between the village and the university, and to add to the economic development of downtown, Colgate relocated its campus bookstore to the downtown area of the village. Colgate also owns and operates, downtown, the Palace Theater, a 300-seat performing arts center, and the Barge Canal Cafe, a coffee shop and performing venue for local and student performers. The Barge Canal building served as a freight transfer point for barges on the Chenango Canal which ran alongside the building.

The Robert Trent Jones, Sr. designed Seven Oaks Golf Course is located on the east side of the village. The Picker Art Gallery is located on the Colgate University campus. The Towpath Trail, beginning in the village and extending northward for 6 miles (9.7 km), consists of restored portions of the Chenango Canal towpath. A Utica television station travel show broadcast, in 2008, a two-part tour of things to see and do in the village.

Farther from Hamilton, but within 50 driving miles, additional points of interest include: the Earlville Opera House, the Munson-Williams-Proctor Arts Institute in Utica, the National Baseball Hall of Fame and Museum in Cooperstown, the Syracuse Symphony Orchestra, the Everson Museum of Art in Syracuse, the Erie Canal Village in Rome and the Erie Canal Museum in Syracuse.

The Hamilton Central School, located on a 45-acre (18 ha) site off West Kendrick Avenue, is a K-12 educational facility for the village and surrounding town and the communities of Eaton, Madison, Lebanon, and Brookfield. Colgate University is in Hamilton.

Colgate is the largest economic influence in the village: with a population of over 4,000, the village's population is just slightly larger than the size of Colgate's student body, which is just under 3,000. Approximately 85 percent of the university's faculty members live within 10 minutes of campus.

The village, the town of Hamilton, and Colgate have formed the Partnership for Community Development which develops an active network of professional consultants, foundations, municipalities and not-for-profit organizations located throughout the Central New York region to assist area residents, businesses and visitors, including efforts to stimulate and support local business through small business development and the revitalization of historic buildings. To strengthen the relationship between the village and the university, and to add to the economic development of downtown, Colgate relocated its campus bookstore to the downtown area of the village.

All content from Kiddle encyclopedia articles (including the article images and facts) can be freely used under Attribution-ShareAlike license, unless stated otherwise. Cite this article:
Hamilton (village), New York Facts for Kids. Kiddle Encyclopedia.