John Vincent Atanasoff (October 4, 1903 – June 15, 1995) was an American physicist and inventor, best known for being credited with inventing the first electronic digital computer.

Atanasoff invented the first electronic digital computer in the 1930s at Iowa State College. Challenges to his claim were resolved in 1973 when the Honeywell v. Sperry Rand lawsuit ruled that Atanasoff was the inventor of the computer. His special-purpose machine has come to be called the Atanasoff–Berry Computer. 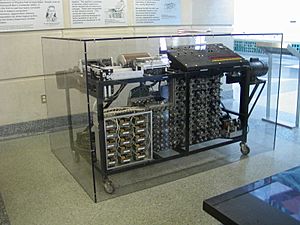 Partly due to the drudgery of using the mechanical Monroe calculator, which was the best tool available to him while he was writing his doctoral thesis, Atanasoff began to search for faster methods of computation. At Iowa State, Atanasoff researched the use of slaved Monroe calculators and IBM tabulators for scientific problems. In 1936 he invented an analog calculator for analyzing surface geometry. The fine mechanical tolerance required for good accuracy pushed him to consider digital solutions.

With a grant of $650 received in September 1939 and the assistance of his graduate student Clifford Berry, the Atanasoff–Berry Computer (ABC) was prototyped by November of that year. According to Atanasoff, several operative principles of the ABC were conceived by him during the winter of 1938 after a drive to Rock Island, Illinois.

The key ideas employed in the ABC included binary math and Boolean logic to solve up to 29 simultaneous linear equations. The ABC had no central processing unit (CPU), but was designed as an electronic device using vacuum tubes for digital computation. It also had regenerative capacitor memory that operated by a process similar to that used today in DRAM memory.

All content from Kiddle encyclopedia articles (including the article images and facts) can be freely used under Attribution-ShareAlike license, unless stated otherwise. Cite this article:
John Vincent Atanasoff Facts for Kids. Kiddle Encyclopedia.