Konrad Zuse (22 June 1910 – 18 December 1995) was a German civil engineer, inventor and computer pioneer. His greatest achievement was the world's first programmable computer; the functional program-controlled Turing-complete Z3 became operational in May 1941. Thanks to this machine and its predecessors, Zuse has often been regarded as the inventor of the modern computer.

Zuse was also noted for the S2 computing machine, considered the first process control computer. He founded one of the earliest computer businesses in 1941, producing the Z4, which became the world's first commercial computer. From 1943 to 1945 he designed the first high-level programming language, Plankalkül. In 1969, Zuse suggested the concept of a computation-based universe in his book Rechnender Raum (Calculating Space).

Much of his early work was financed by his family and commerce, but after 1939 he was given resources by the Nazi German government. Due to World War II, Zuse's work went largely unnoticed in the United Kingdom and the United States. Possibly his first documented influence on a US company was IBM's option on his patents in 1946. 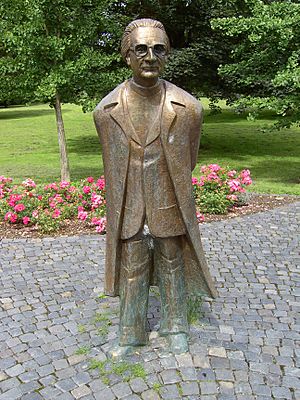 Konrad Zuse married Gisela Brandes in January 1945, employing a carriage, himself dressed in tailcoat and top hat and with Gisela in a wedding veil, for Zuse attached importance to a "noble ceremony". Their son Horst, the first of five children, was born in November 1945.

After he retired, he focused on his hobby of painting.

Zuse was an atheist.

Zuse died on 18 December 1995 in Hünfeld, Germany (near Fulda) from heart failure.

All content from Kiddle encyclopedia articles (including the article images and facts) can be freely used under Attribution-ShareAlike license, unless stated otherwise. Cite this article:
Konrad Zuse Facts for Kids. Kiddle Encyclopedia.