Bad Hersfeld is the capital of the district Hersfeld-Rotenburg, in the state of Hesse in Germany. It is a well-known festival and spa town. Every summer, the Bad Hersfelder Festspiele (festival) are held here in 1951 at the monastery ruins. It is the largest Romanesque church ruin in Europe. 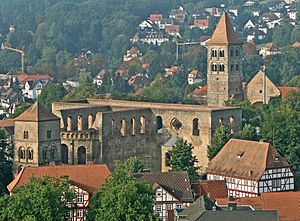 All content from Kiddle encyclopedia articles (including the article images and facts) can be freely used under Attribution-ShareAlike license, unless stated otherwise. Cite this article:
Bad Hersfeld Facts for Kids. Kiddle Encyclopedia.