Iowa State University of Science and Technology, generally referred to as Iowa State, is a public flagship land-grant and space-grant research university located in Ames, Iowa, United States. It is the largest university in the state of Iowa and the 3rd largest university in the Big 12 athletic conference. Iowa State is classified as a Research University with very high research activity (RU/VH) by the Carnegie Foundation for the Advancement of Teaching. Iowa State is also a member of the Association of American Universities (AAU), which consists of 62 leading research universities in North America.

Founded in 1858 and coeducational from its start, Iowa State became the nation’s first designated land-grant institution when the Iowa Legislature accepted the provisions of the 1862 Morrill Act on September 11, 1862, making Iowa the first state in the nation to do so.

Iowa State University's athletic teams, the Cyclones, compete in Division I of the NCAA and are a founding member of the Big 12 Conference. The Cyclones field 16 varsity teams and have won numerous NCAA national championships. 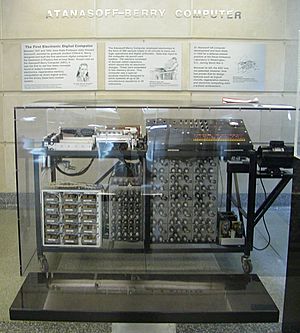 On October 19, 1973, U.S. Federal Judge Earl R. Larson signed his decision following a lengthy court trial which declared the ENIAC patent of Mauchly and Eckert invalid and named Atanasoff the inventor of the electronic digital computer—the Atanasoff-Berry Computer or the ABC.

An ABC Team consisting of Ames Laboratory and Iowa State engineers, technicians, researchers and students unveiled a working replica of the Atanasoff-Berry Computer in 1997 which can be seen on display on campus in the Durham Computation Center.

ISU is the only university nationwide that has a U.S. Department of Energy research laboratory physically located on its campus. Iowa State played a critical role in the development of the atomic bomb during World War II as part of the Manhattan Project, a research and development program begun in 1942 under the U.S. Army Corps of Engineers to develop the atomic bomb.

The process to produce large quantities of high-purity uranium metal became known as the Ames process. One-third of the uranium metal used in the world’s first controlled nuclear chain reaction was produced at Iowa State under the direction of Frank Spedding and Harley Wilhelm. The Ames project received the Army-Navy ‘E’ Award for Excellence in Production on October 12, 1945, signifying two-and-one-half years of excellence in industrial production of metallic uranium as a vital war material. Iowa State is unique among educational institutions to have received this award for outstanding service, an honor normally given to industry.

Today, the Ames Laboratory focuses on more peaceful applications of materials research, usually related to increasing energy efficiency. It has broadened the scope of its research into various areas of national concern, including energy resources, high-speed computer design, environmental cleanup and restoration, and the synthesis and study of new materials.

Since its inception in 1858, Iowa State has fostered excellence in its alumni, under the instruction of world-class faculty. These people include astronauts, scientists, Pulitzer Prize winners, statesmen, academicians, CEOs, entrepreneurs, athletes, film and television actors, and a host of other notable individuals in their respective fields.

All content from Kiddle encyclopedia articles (including the article images and facts) can be freely used under Attribution-ShareAlike license, unless stated otherwise. Cite this article:
Iowa State University Facts for Kids. Kiddle Encyclopedia.