Ames is the home of Iowa State University of Science and Technology (ISU), a public research institution with leading Agriculture, Design, Engineering, and Veterinary Medicine colleges. ISU is the nation's first designated land-grant university, and the birthplace of the Atanasoff–Berry Computer, the world's first electronic digital computer. Ames hosts one of two national sites for the United States Department of Agriculture's Animal and Plant Health Inspection Service (APHIS), which comprises the National Veterinary Services Laboratory and the Center for Veterinary Biologics. Ames is also the home of the USDA's Agricultural Research Service's National Animal Disease Center. NADC is the largest federal animal disease center in the U.S., conducting research aimed at solving animal health and food safety problems faced by livestock producers and the public. Ames has the headquarters for the Iowa Department of Transportation.

In 2010, Ames was ranked ninth on CNNMoney.com "Best Places to Live" list.

The city was founded in 1864 as a station stop on the Cedar Rapids and Missouri Railroad and was named after 19th century U.S. Congressman Oakes Ames of Massachusetts, who was influential in the building of the transcontinental railroad. Ames was founded by local resident Cynthia Olive Duff (née Kellogg) and railroad magnate John Insley Blair, near a location that was deemed favorable for a railroad crossing of the Skunk River. 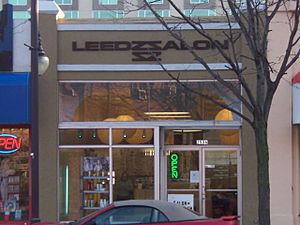 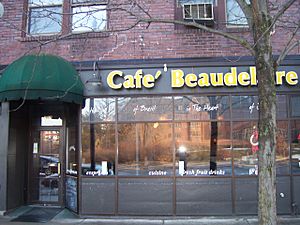 Campustown is the neighborhood directly south of Iowa State University Central Campus bordered by Lincoln Way on the north. Campustown is a high-density mixed-use neighborhood that is home to many student apartments, nightlife venues, restaurants, and numerous other establishments, most of which are unique to Ames.

Ames has a humid continental climate (Köppen climate classification Dfa). On average, the warmest month is July and the coldest is January. The highest recorded temperature was 102 °F (39 °C) in 1988 and the lowest was −28 °F in 1996.

There were 22,759 households of which 19.1% had children under the age of 18 living with them, 35.6% were married couples living together, 5.4% had a female householder with no husband present, 2.7% had a male householder with no wife present, and 56.2% were non-families. 30.5% of all households were made up of individuals and 6.2% had someone living alone who was 65 years of age or older. The average household size was 2.25 and the average family size was 2.82.

There were 18,085 households out of which 22.3% had children under the age of 18 living with them, 42.0% were married couples living together, 5.3% had a female householder with no husband present, and 50.4% were non-families. 28.5% of all households were made up of individuals and 5.9% had someone living alone who was 65 years of age or older. The average household size was 2.30 and the average family size was 2.85. 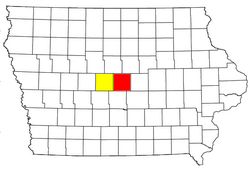 Ames is the larger principal city of the Ames–Boone CSA, a Combined Statistical Area that includes the Ames metropolitan area (Story County) and the Boone micropolitan area (Boone County), which had a combined population of 106,205 at the 2000 census.

Ames Historical Society
Collects, preserves, and provides access to evidence of the history of Ames and its immediate vicinity from pre-settlement times to the present
Brunnier Art Museum (Scheman Building)
Ames Public Library
The Ames Public Library is a Carnegie library founded on October 20, 1904. It currently has 1,386,273 items in circulations, including 799,349 books and 586,924 multimedia items.
The Octagon Center for the Arts
The Center includes galleries, art classes, art studios, and retail shop. They sponsor the local street fair, The Octagon Arts Festival. Also have the Annual National Juried Exhibition Clay, Fiber, Paper Glass Metal, Wood.
The Space for Ames
Formally known as the Ames Progressive, The Space for Ames was a community space that served as an art gallery, music venue and classroom for community workshops.

The Ames area has a large number of parks and arboretums.

Iowa is a political "battleground state" that has trended slightly Democratic in recent years, and Ames, like Iowa City, also trends Democratic. Because Iowa is the first caucus state and Ames is a college town, it is the site of many political appearances, debates and events, especially during election years.

From 1979 through 2011, Ames was the location of the Ames Straw Poll, which was held every August prior to a presidential election year in which the Republican presidential nomination was undecided (meaning there was no Republican president running for re-election—as in 2011, 2007, 1999, 1995, 1987, and 1979). The poll would gauge support for the various Republican candidates amongst attendees of a fundraising dinner benefiting the Iowa Republican Party. The straw poll was frequently seen by national media and party insiders as a first test of organizational strength in Iowa. In 2015, the straw poll was to be moved to nearby Boone before the Iowa Republican Party eventually decided to cancel it altogether.

All content from Kiddle encyclopedia articles (including the article images and facts) can be freely used under Attribution-ShareAlike license, unless stated otherwise. Cite this article:
Ames, Iowa Facts for Kids. Kiddle Encyclopedia.