Nevada ( nə-VAY-də) is a city in, and the county seat of, Story County, Iowa, United States. The population was 6,925 in the 2020 census, an increase from 6,658 in 2000. Nevada is part of the Ames, Iowa Metropolitan Statistical Area, which is a part of the larger Ames-Boone, Iowa Combined Statistical Area. Nevada is the second-most populous city in Story County, Iowa. The city's name is pronounced differently from the U.S. state of Nevada. 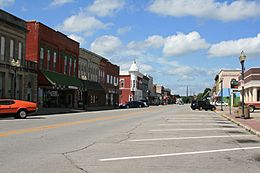 Nevada was platted in 1853. It was named after the Sierra Nevada mountains. A post office has been in operation in Nevada since 1854.

Nevada is served by US Highway 30 which was known as the Lincoln Highway and Lincoln Way in town. It bisects Nevada north and south through the business district. A new US Highway 30 bypass was built in the 1970s to the south of the city and Lincoln Way through town was reduced to county road status. Iowa Highway 133 now connects the business district to the new US Highway 30 to the south. Nevada is also served well by a network of paved farm to market county roads.

Nevada was served by the Chicago and North Western Railroad. The Union Pacific Railroad now owns the line which crosses the city east to west north of the business district. Up until the mid-1980s, all railroad crossings except for a new one in the northwest section of town were protected by WRRS center harp style wigwag signals. Shortly thereafter, these signals were replaced with standard flashers and gates due to safety concerns and lack of available wigwag parts.

Nevada was also served by the Chicago, Rock Island and Pacific Railroad's "Spine Line" between Minneapolis, MN and Kansas City, MO. This north-south line jogged east-west through southern Nevada. It then veered north again and crossed under the C&NW mainline east of Nevada. An agency station was maintained until 1980 when the Rock Island went bankrupt and ceased to function.

The C&NW purchased the Rock Island "Spine Line" which offered better and more direct connections for Minneapolis and Kansas City. Since they did not directly interchange east of town, a new line was built from the Chicago and Northwestern Railroad east-west main line on the west side of Nevada to connect with the former Rock Island "Spine Line on the southwest side of Nevada. The junction on the Spine Line was referred to as "Chicago Junction" while the junction on the Chicago and Northwestern Railroad east-west mainline was referred to as "Kansas City Junction". This new line necessitated the building of an overpass for the old Lincoln Highway on the west side of Nevada.

The Union Pacific Railroad purchased the Chicago and North Western Railroad in 1995. Rail traffic on both the east-west mainline and the "Spine Line" along with interchange traffic has increased considerably in the years since the purchase.

Nevada Community School District operates public schools. The school colors are purple and gold, and the mascot is a cub.

All content from Kiddle encyclopedia articles (including the article images and facts) can be freely used under Attribution-ShareAlike license, unless stated otherwise. Cite this article:
Nevada, Iowa Facts for Kids. Kiddle Encyclopedia.