The county is home to Iowa State University in Ames. 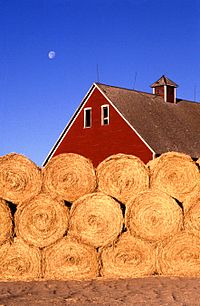 Bales of hay on a farm near Ames, Story County, Iowa

The land that today is known as Story County was originally prairie with the exception of some groves along the larger streams in the area. In 1846 the boundaries of Story County were established. The County has an area of 576 square miles (1,490 km2) and is square in shape.

The county was named after Joseph Story, a preeminent United States Supreme Court Justice, in 1853.

The first settlers in Story County came mainly from Indiana, New York and Pennsylvania. Later, many Norwegians, Germans and Danes came directly from overseas and inhabited the area. The first large population influx occurred during the 1850s. Story County was not mentioned in the Federal Census in 1850, but figures from the State of Iowa put the population at 214 in 1852. By 1860 the population had increased to 4,501.

Three commissioners appointed by the Iowa legislature selected the location of county seat on June 27, 1853. The location was Nevada, Iowa. Nevada (pronounced Nuh-VAY-Dah) was named after the Sierra Nevada mountain range in California. Like many Midwestern towns, cities and counties, many prominent locations from the newly explored West and Mexican-American War of the late 1840s inspired the naming of towns and counties in Iowa during this period.

Railroad construction did more to develop Story County, as it did for the entire American West, than anything else. The first railroad came to the county in 1864. Railroads were such a decisive factor in determining the location of towns that several communities in Story County moved to be closer to the rail line. Some flourishing little towns that were bypassed by the railroad soon disappeared. Although Nevada was long the population center of the county, Ames was the most widely known of the towns because of the busy railroad depot where travelers changed trains for all points north, south, east and west.

In its history, Story County has had five courthouse structures in use. The first courthouse, a two-storey frame building, was built in 1856 but was destroyed by fire in 1863. It was replaced by a similar structure. Soon after, a new courthouse was planned, and it was completed in 1877. The three-storey building was situated on the town square. In the building was a tower in which school children could climb to see a panoramic view of the landscape, which was removed later due to safety reasons. A post-modern style courthouse in was built in 1967 and dedicated on May 18, 1968. That courthouse today houses the Board of Supervisors, Auditor, Treasurer, Recorder, Assessor, Information Technology, Facilities Management, Health and Planning & Development Offices. A cannon from the Civil War rests on the lawn. The current courthouse, the Story County Justice Center, is the newest addition to the family of County Facilities. Opening in 2002, the Justice Center is the heart of the law enforcement and judicial aspects of Story County Government. The Story County Sheriff's Office, Attorney, and Clerk of Court are all housed in this building.

The following Story County statistics were gathered by the 2010 U.S. Census. 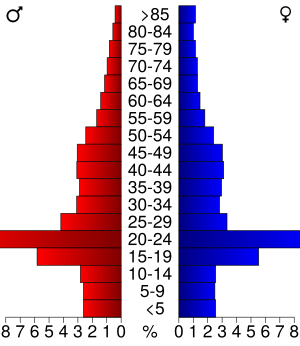 According to the Story County Laborshed Analysis, which was analyzed and compiled by the Iowa Workforce Development in August 2011, Story County has a total potential labor force of 424,702 people, which breaks down as follows: Employed - 75.3% Unemployed - 8.37% Homemakers - 7.8% Retired - 8.2%

Those unemployed and willing to enter / re-enter employment are willing to commute an average of 24 miles one way for the right opportunity.

The population ranking of the following table is based on the 2010 census of Story County.

All content from Kiddle encyclopedia articles (including the article images and facts) can be freely used under Attribution-ShareAlike license, unless stated otherwise. Cite this article:
Story County, Iowa Facts for Kids. Kiddle Encyclopedia.