Polk County is located in the U.S. state of Iowa. As of the 2020 census, the population was 492,401. It is Iowa's most populous county, and home to over 15% of the state's residents. The county seat is Des Moines, which is also the capital city of Iowa. Polk County is included in the Des Moines–West Des Moines, IA Metropolitan Statistical Area.

Polk County was formed on January 13, 1846. It was named after President James K. Polk.

The first courthouse, a two-story structure, was built in 1846. Construction of a second courthouse was begun in 1858. Due to construction delays and the onset of the Civil War, the structure was not completed until 1866. The present courthouse was erected in 1906 in the Beaux Arts style. It was dedicated on October 31, 1906. In 1962, an extensive renovation was undertaken. 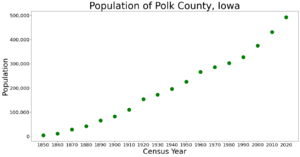 Population of Polk County from US census data

The population ranking of the following table is based on the 2010 census of Polk County.

All content from Kiddle encyclopedia articles (including the article images and facts) can be freely used under Attribution-ShareAlike license, unless stated otherwise. Cite this article:
Polk County, Iowa Facts for Kids. Kiddle Encyclopedia.