Berwick is an unincorporated community in Polk County, Iowa, United States, on the east bank of Fourmile Creek. It is part of the Des Moines–West Des Moines Metropolitan Statistical Area. 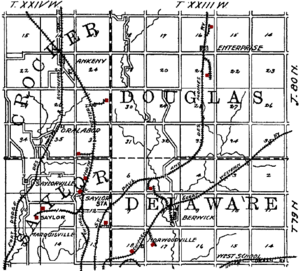 Map of the Berwick area from 1908, showing the railroads and coal mines (red) of the region. Berwick is in the lower center.

All content from Kiddle encyclopedia articles (including the article images and facts) can be freely used under Attribution-ShareAlike license, unless stated otherwise. Cite this article:
Berwick, Iowa Facts for Kids. Kiddle Encyclopedia.